I'd not done hardly anything to the layout in the past three weeks. E-mails have gone unanswered, projects half-completed on the workbench are buried under other bits of correspondence. . .it's really a tough time of year to get anything done.

But this too will pass after January 01.

I'm looking forward to getting back after it.

I did solder in drops for as much of the layout as I have track laid for, and amused holiday guests by running a loco and a few wagons back and forth.

And I decided, in the interests of expediency and overcoming decision avoidance to just stick some N-scale Caboose Industries ground throws on the layout, until such time I really honestly decide how to throw my points.

Now, back to the never-ending party around our house. Be back after the New Year!
Posted by B. Kooistra at 5:52 AM 2 comments: 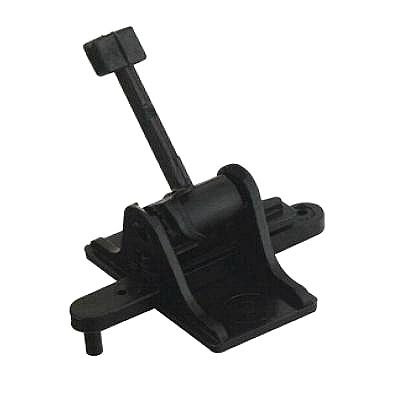 DON'T make me use these!

Model railway design should encompass more than just benchwork, wiring, track planning and equipment--one should also consider just how the railway will be operated. The method of operation and its various nuances will influence things like how (even with DCC) electrical blocks are divided up, and how points will be thrown.

For lack of anything cheaper, easier to use, or more elegant in design, previous layouts I've built have used Caboose Industries ground throws to align the points. They're certainly cheap and easy to install, but there's no getting past that they're large, shiny, plastic lumps in an otherwise prototype-driven world--it's the price one pays for cheap and easy.

There've been lots of home-grown alternatives as the best way to throw points manually (i.e., without resorting to electric motors), ranging from hand-bent springs above the benchwork to inexpensive Radio Shack switches mounted below, attached to the throwbar with a piece of stout wire and manipulated through the fascia of the layout with a wire or dowel. One non-electrical solution is the Blue Point controller, which installs much like a Tortoise motor (and almost costs as much!) but is manually operated; another option for manual control is offered by Modratec using "wire in tube" connections. My preference is for manual control of points whenever possible--it just seems more realistic, from an operating standpoint, for train crews to actually throw points rather than just flipping an electrically switch to do the job.

Understanding "how" the New South Wales Railway operates should guide my decision. My cursory and admittedly flimsy understanding so far of NSWGR safeworking has led me to believe that nearly all mainline points are manipulated from a grouped "lever frame" where several points are thrown from one area. In some locations, these lever frames are located at the train station or staff office, and thrown by a station employee; at outlying areas at a station, train crews throw the points. Unlike US railroads, where train crews use a universal switch key to open locks at individual turnouts to set the points, the lever frames are unlocked using a "key" integrated into the same staff that gives them their authority to operate within a mainline track segment. . . thus, to be most realistic, I'd not use the Caboose Industries ground throws (which look horrible, anyway), and would opt for a model simulation of a ground frame (exactly what Modratec offers), or, barring that, at least grouping my point levers to locations on the fascia that would emulate what the prototype would do. . . ideally, they'd need to be unlocked using some sort of staff that also allows movement on the main track. Within shunting yards and away from the mainline and loops, single points are thrown, however, from levers adjacent to the points, much as in the US practice. And that's just the mechanical end of things--the modeler in me would of course want to feature the piping and levers and all that other stuff on the layout, even if static in nature, just to "look right." Then there's the issue of catch points, and . . . . .

This striving for prototype duplication leads somewhere else, too: how would one best model the staff system on a DCC layout? In reading descriptions of the operating rules and various scenarios on how trains were worked in the modeling press (and on line), it's clear that the staff safeworking system used in New South Wales is waaaaay different from what us Americans are used to. It would be easy, as a modeler living in the US, to just gloss over this difference: after all, if the trackage is based on Australian prototype, as are the structures and all the railway equipment, what harm will it do to run them just like we would here in the States? Modelers in the US are, after all, used to running trains a certain way. . .to learn a different way of doing so would really be a mind-blower! But if one does, indeed, strive to emulate the prototype with realistic track planning, judicious purchasing of equipment to match a specific time and place, the tabling of trains for operations to match what the real NSWGR did, etc., isn't it just dropping the ball NOT to model the safeworking system as thoroughly as possible?

These are the things that keep me up at night.

So while I go over and over in my mind on how to control the points on the railroad, let alone how I can create a model of an operating staff system, at some point, in order to get the damned thing operating, I'll have to make a decision. . .should I judiciously study if further, or just bite the bullet and go for a cheap, quick (temporary) alternative to use until the lightbulb goes off over my head, the "ah HA!" moment strikes, and I figure out the best way to deal with this?

Aussie modelers: what do YOU use to control your points?
Posted by B. Kooistra at 10:01 AM 5 comments: