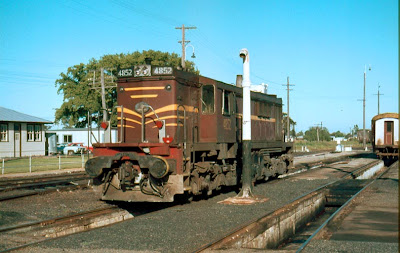 48 Class 4852, assigned to Werris Creek loco, on the inspection pit at Narrabri West. These were the dominant locomotive in the North-West (Photographer unknown; apologies if the photographer objects). . .

Now that construction is well along on the upper level of the North-West NSW layout, it might be a good time to look at the locomotives and rolling stock that will populate the railway when it is up and operating. First, the locomotives.If you like Alco locomotives, you'd love the New South Wales Railway of the 1970s. Alco was the dominant motive power in NSW, with only a few token orders of EMD-powered locomotives denting the Alco dominance.

For photographs of these and all other classes of Australian locomotives, I truly recommend Brian's Loco Photographs.

48 Class
The prototype: The branchlines of New South Wales were dominated by 165 48 Class Alco-Goodwin DL-531 delivered in four batches between 1959 and 1970. The six-motor locomotives weighed only 170,000 lbs, and were powered by a six-cylinder Alco 251B. These locomotives killed off steam on the North-West branchlines; the locomotives working through Narrabri were largely assigned to Werris Creek. Even today, the surviving 48's, largely from the higher-numbered fourth series, toil on for current owner Pacific National. A handful of other older units survive in service for the smaller operators, many leased from museums. The model: Powerline has had a model of the 48 class available for over 10 years; however, the detail is clunky, the wheel sets equipped with "pizza cutter" flanges, and the drive. . .well, only one truck is powered. At least two third-party replacement underframes with six-axle drive are available, as are a slew of detail parts. However, all this will be rendered obsolete sometime next year when Trainorama delivers their first release of this locomotive. The early samples look very nice! I've got an initial three on order, and will likely order a few more when the Mark III or Mark IV versions are produced. 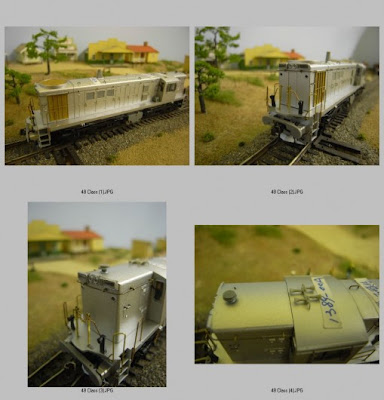 Detail photos of a test-run of the new Trainorama 48 Class, due 2009. (photo stolen off the Trainorama website)

49 Class
Amid the flood of 48's being delivered in the early 1960s, NSWGR turned to Clyde-GM for an equivalent EMD-powered branchliner, the 49 Class, or G8C model. Powered by an 8-cylinder EMD 567CR, 18 950-horsepower 49's were delivered between 1960 and 1964, largely as a political favor to keep Clyde interested in the New South Wales market. Weighing in at 180,000 lbs., they were largely assigned to operate between Parkes and Broken Hill, though they were occasional visitors to Narrabri. Personally, I don't think they're the most attractive locomotives in the world, but their chunky looks are distinctive. The model: Brass imports and white-metal kits of the 49 Class have been available for while, but Trainorama has delivered a superbly detailed and smooth-operating model early in 2008. I'm adding one to the roster .

47 Class
The wierdest of the trio of "branchliner" diesels in the NSW was the 20 Catepillar-powered locos built by Goninan in 1972-73. The locomotives were troublesome throughout their careers, prone to overheating. They were also occasional visitors to Narrabri, though assigned most of their careers to Bathurst or Broadmeadow (Newcastle). The 16-cylinder prime mover delivered 1130hp, weighing 180,000 lbs. Supposedly, the NSWGR was hard up for more branchline locomotives at the time to complete dieselization; Clyde refused to bid on an order, and Goodwin was unable to deliver additonal 48's in a timely manner. The model: The first of the trio of Trainorama NSWGR branchliner models--stunning. Wish I needed more than one!

44 Class
Operation of the 100 DL500B "world locomotive" Alco-Goodwin cab units was rare into Narrabri; but, i'll exercise a bit of modeler's license here. Essentially a cab unit version of an RSD15 with 1940 horspower output using a 251-series Alco prime mover. These units worked every mainline in New South Wales since their deliver commenced in 1957. Most were retired by the early 1990s, but a handful survive in service today for CFCLA and Independent Railway of Australia as well as heritage operators. The model: Though Lima has offered a rather crude model for years, Trainorama--who else?--offers a superb model. The 4464 was my first Australian model, and led me into this madness. . .

442 Class
Australian railways in the 1970s embraced the double-ended boxcab arrangement for locomotives. . .unfortunately. In New South Wales, the railway followed the national trend by acquiring 40 updated DL500B's, designated the DL500G, in 1971. Powered by the Alco 12-251C, these also produced around 2000 horsepower. The "Jumbos" were built by Goodwin, and, after it went out of business, Commonwealth Engineering (Comeng). They too served across the state on all mainlines before their demise in the 1990s. Several were scrapped, though most survived, either revived by operators such as Silverton, or used as rebuild fodder for CFCLA. The Model: I believe AR Kits/Lloyds Models produced a white metal kit, but the most popular version was produced by Austrains and is still occasionally found on ebay or Oztion. Austrains is planning to upgrade the model and rerelease it in 2009 or 2010. I'll be adding one of these for freight service when I can find a good deal on a used one.
Posted by B. Kooistra at 10:37 PM No comments: