After fifteen months of on-again, off-again construction, the North-West railroad is an operating reality. I had Lance over to give the railroad a little "test run"--at least the upper level where trackwork is completed. I staged a number of trains, and while I didn't adhere to any sort of timetable operation, I did roughly try to approximate the sequencing of trains through Narrabri consistent with what was running in the late 1970s.

We operated a good assortment of trains, in sequential order:

That's a good number of trains to run in two or three hours. Trains operated between upper-level staging and a passing loop/trailing mainline on the lower level, and a stub-end single track as the branch to Wee Waa. Lance operated the shunting engine, and declared it a good job to operate. All of this was done quite informally, with no paperwork, etc. It was just a way to start to shake out the bugs on the railroad. . .and there were a few:

On the whole, it wasn't a bad first session. It gave me an extra kick of motivation to get projects and items I'd been procrastinating on doing finished, and validated (to me at least) that this will be an interesting layout to operate. And that wasn't even with the additonal operating potential of the lower level (a pair of crossing loops, grain silos, goods sidings, etc.) figured into the equation.

I don't know when the first "official" running night will be--with paperwork and all that good stuff to guide the operators in their endeavours--but it shouldn't be too far down the road now. 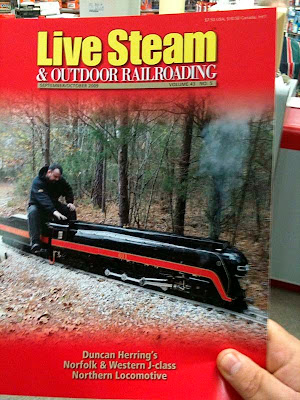 Sometimes, to paraphrase the great Austrian psychologist, a locomotive is just a locomotive. . . . 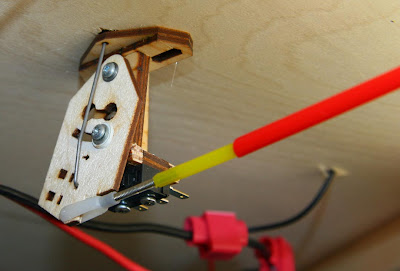 A typical installation of a Bull Frog point controller, from Fast Tracks. It's an all-wood structure, laser-cut and glued together (or, you and purchase them pre-assembled). I've cut away a portion of the fulcrum to allow a nylon R/C aircraft clevis to attack the throw-rod to the mechanism. . .

I've just finished installing nearly 40 switch point under-baseboard controllers on the upper level of the Narrabri layout. The majority of the controllers are the New Rail Models Blue Point controllers reviewed in a previous posting. Six are Fast Tracks' offering, the Bull Frog.

I decided to go with the Blue Point units for a couple of reasons: 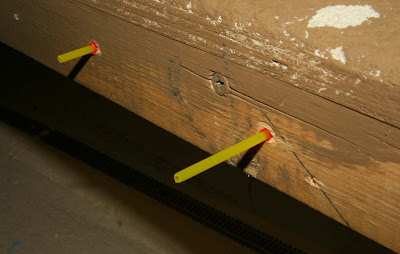 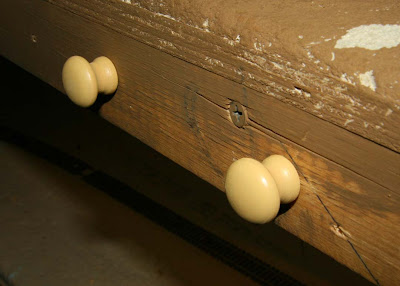 With knobs in place, there's little difference between the two with the mechanisms in the "full forward" position. . . 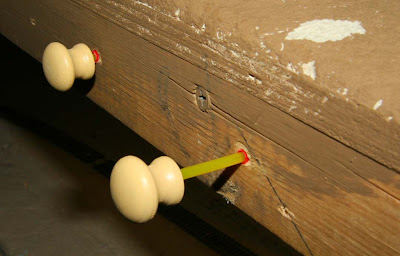 . .but there's quite a difference when the mechanisms are pulled outward. I'm guessing the Bull Frog knob will be inadvertantly snagged a few times each operating session!

Dimensionally, the Bull Frogs are smaller in height (49.5mm vs. 60mm for the Blue Point), a consideration if you're building a multi-deck layout where a thin profile upper deck is important. Distance from bottom of the baseboard to the center-line of the actuating rod from the fascia of the layout is 43.9mm for the Bull Frog and only 20mm for the Blue Frog--a chief factor in the length of the throw of the unit. The big throwing range results in crazy torque--if your turnout isn't secured to the layout, the Bull Frog will try to move it out of the way!

I do like the "feel" of the Bull Frog as it throws--it doesn't "snap" over like the Blue Point, as the throwing function is a spring-mounted ball-bearing rolling along a tapered groove to a larger laser-cut detent at each end of the throwing range. The Blue Point uses an off-the-shelf mini electrical switch set inside a plastic casting.

While the Bull Frog is a nice unit, the lower price and shorter throw at the fascia front made the Blue Point the preferred mechanism for my layout. 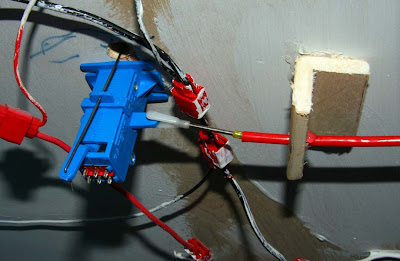 A typical Blue Point mechanism installed under the layout. It can get busy in there with bus wires and throw-rods! 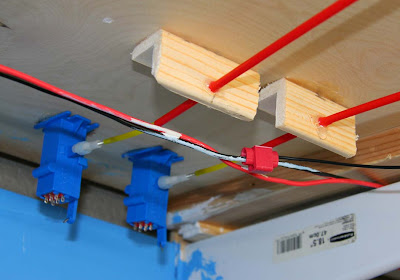 Additional support to the tube-in-tube is given on long (over 9") runs by simply hot-gluing a short section of L-shaped wood molding in place.

A few notes on installation:

So, the trackwork on the upper level is just about done. All powered up, point controllers in place, and just about ready to host the first "shake down" operating session, hopefully before the end of the month. It's exciting getting to the point to actually invite friends over to operate trains! Of course, before that happens, there's some tuneup of trackwork, a little troubleshooting here and there, preparing the "operating aids" for the layout (track diagrams, station names on fascia fronts, etc.). There's still lots to do, but getting the point controls checked off the list really moved this project ahead!