Another One Bites the Dust! 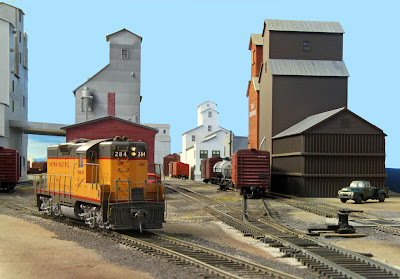 
What is it with the layouts coming down? Seems I know of more being dismantled than abuildin' these days. . . while Dallas/Fort Worth was never a bit hotbed of prototype-based operating layouts, we're losing another great one with the imminent demise of Harry Bilger's very cool railway depicting the small town of Moscow, Idaho circa 1965.

You might remember this one from the 2009 Model Railroad Planning magazine. Harry, who grew up near the Red River in Sherman, Texas, memorialized the northern Idaho farm/college town of Moscow in an 11 X 22' layout in a separate building outside his Whitesboro, Texas home. Harry's been retired a few years, and he's making the wise choice to sell his home and nice wooded property and move with his wife into a senior's townhome down the road in Denton. Better to make the move now, while they still have their health, than when it becomes a real issue.

Harry made a career on the Milwaukee Road railroad in Chicago, but he chose not to model this great railroad, nor his childhood Texas lines, but Moscow, where he spent less than two years while attending University of Idaho. But what a railroad town! Moscow was served by branchlines of three railroads of the northwest, Union Pacific, Northern Pacific, and Great Northern. Harry's layout features the first two; his next, somewhat smaller layout in the new townhome will depict the GN in Moscow.

UP and NP shared a narrow corridor though Moscow, lined with grain elevators, seed warehouses, lumber yards, cement distributors and oil jobbers. It's a great prototype to model--relatively compact, with interesting operations. UP had a local originate here on a turn to Colfax, Washington; NP served Moscow with an out and back local from Pullman and two through freights and an RDC passenger train in each direction also ran thru each day.

I had a second opportunity to operate the layout last week, and it ran flawlessly. Harry's scratchbuilt structure are among the stars of the layout, and he's as interested in digging up a new fact or photo as he is adding another accurate boxcar to the railroad. There's nothing flashy on the railroad in Moscow--it's same old same old GP9's for power, and boxcars, flat cars, tank cars, and cement hoppers between that and the steel cabooses.

For my Aussie modeling friends, the lesson I take away from this American-based railway is this: Harry's layout is another argument for the notion that modeling the "ordinary" often results something that definitely is NOT boring.

It's a shame it's coming down in a few weeks, but I'm sure his next Moscow creation will be just as evocative. And I'll be 30 miles closer to his new place, so I hope to be a frequent visitor! 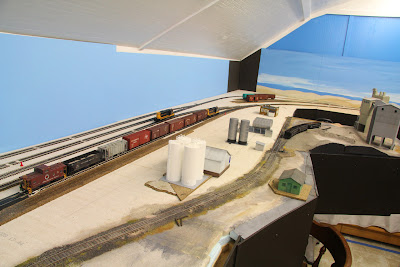 "back side" of the layout, featuring visible staging and NP's long cement/oil spur track. 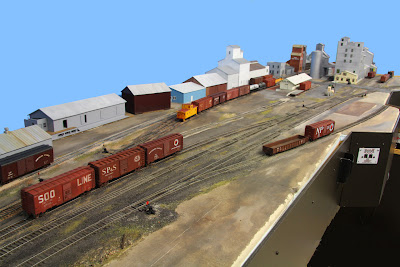 Overview of Moscow, NP in the foreground, UP towards the back. The majority of structures are scratchbuilt to match their prototype. 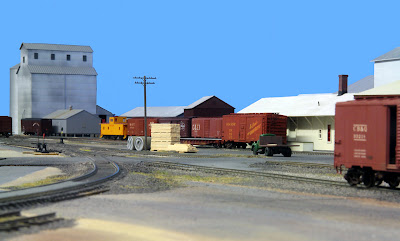 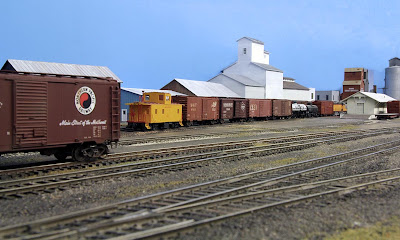 Looking across the NP yard toward the Union Pacific depot.

Alcos in the mail--and they aren't 48 class.

Modeling NSW doesn't mean I don't have other modeling interests. I'll collect a few locomotives or freight cars of US railroads that might have sentimental or special interests. There's a small fleet of Milwaukee Road boxcars and grain hoppers and a nice Walthers rib side caboose in the closet. I've got a sweet Burlington Northern F45 from Athearn as a memento of seeing these giants in the Pacific Northwest. And I've kept a nice handful of rolling stock and the locomotives used on my Walla Walla Valley layout before my NWSGR modeling adventure: the two HH660 Alcos kit-bashed using Lifelike Alco S-series underframe and cab and a resin long hood--definitely custom, and I'm sure the only HO models out there when built painted for Walla Walla Valley!

That isn't the case anymore, since Atlas just released their own HH660 in WWV paint. Walla Walla Valley modeling has gone main-stream! Factory-equipped with an accurate McIntosh/Seymour 538 straight-six turbocharged sound decoder, how could I resist? The detail and running-qualities are better than my kit-bashed version, and the price was right.

They arrived today, only a few months after the order window closed. And I paid nearly $100 apiece under retail for them--under $180 each. And that's with sound. And I didn't have to pay in advance. Eat your heart out.

So when I read whinging Yank modelers on internet discussion boards complaining that Athearn has fallen three months behind on their delivery schedule, how dare those bastards!, I really have to bite my tongue. You have no idea how good you've got it.