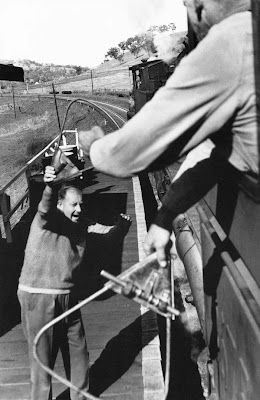 
My wife Mary treated me great for Christmas, for she braved the rigors and fears of overseas credit transactions and two-week shipping times to give me the Wheatley brother's Railway Portraits Volume Two.

What a wonderful book, just as their first one was. Besides the quality of the images, their photography from the final days of steam railroading on the NSWGR appeals to me in so many ways--their ability to capture a moment, composition, and story-telling qualities, sure, but the humanity of the endeavour of operating the railway comes through in each photograph. I feel a connection to the people in the photographs, but also to the photographers, for how they came to make these photographs is very similar to my own early days trackside. While Robert and Bruce made themselves a fixture in the loco depots and platforms of the railway in the late 60s and early 70s, I too took up a camera in my mid-teens and spent a couple of intensive years photographing in black and white a railroading way of life that was doomed: the last years of the legendary Milwaukee Road in the Pacific Northwest of the states.

We certainly shared similar experience: late night photo sessions trackside in freight yards; roaming the locomotive shops as heavy repairs were being done; asking for cab rides; nagging station staff for train movement information; and, when the photography was all done, coming home and developing those black and white images in a makeshift darkroom in Mom's laundryroom.

Though I'm not a steam guy, per se (though the texture and detail in adding steam locomotives are certainly tempting to model!), much of the infrastructure and process of operating the NSWGR in 1965 was the same as it was in 1978-80, my modeling era. Thus, the photographs are a deep well of information to dissect and apply to my modeling.

Not only do I have the disadvantage of modeling an era now 30 years in the past, I model a location I really have no intimate knowledge of--so recollections of those who were there and books and photographs are mostly all I have to go on. That said, developing a library to assist my modeling is essential.

What are my essential titles in my Australian railway library? In no particular order:

Any titles on here I've missed that would further help me understand and model the North-West, circa 1978-80? What titles have inspired you?
Posted by B. Kooistra at 2:48 PM 6 comments:

I recommend the latest issue of Australian Railways Illustrated, if you're not on the subscription list. I just got mine in the post today, and if last issue's salute to the Indian Red/Brown/Tuscan/whatever-you-want-to-call-it era of the NSWGR wasn't tasty enough, this latest issue goes whole hog with a portfolio of classic Graham Cotterall color photographs.

Graham just turned 65, and has been seriously photographing railways, first in Queensland, later in New South Wales, since he was a teenager. He's bridged the gap from medium-format black and white to 35mm slides and today is still banging away with Canon digital gear. Though he experienced the steam era first hand, and its gut-wrenching transition years (and authored a black and white book about it; two, if you include "Units in Focus," the all-diesel volume from the era I model), he's still modern-as-today in his photographic interests: you won't find him track side at the steam museum triple-headers, I'd suppose, when there's a down goods train in good light on the Central West. When he's not trackside--and, I suppose, even when he is, giving cellular communications--he's a locomotive assignment manager for CFCLA and sometimes driver for Southern Shorthaul Railroad.

Now, I've never met Graham personally. We have a few mutual friends, though, and I'm fortunate to be on the receiving end of the latest stunning e-mail with a photo or two from him. We were going to get together in 2009 during my first visit, but he was on holiday with his family in Queensland, but Graham certainly kept Lance Lassen and I informed as to train movements we might be interested in photographing. He's sometimes called "The Sun God," for he seemingly never takes a photo when it isn't full-out sunny. The sun, we joke, just follows him around.

So, please, check out the selection of his work in the latest ARI (I'd provide a website link, but I can't find it in the mag anywhere!).
Posted by B. Kooistra at 8:06 PM 1 comment: 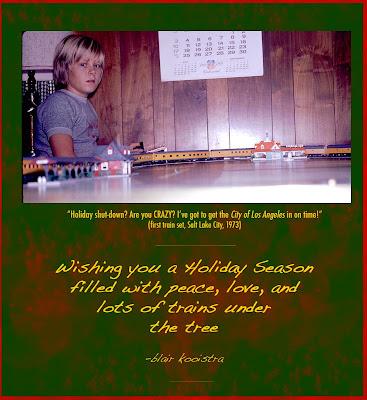 My e-mail Christmas card. Click for the full effect. . .

It's been too damned long since I've updated this blog. So long, in fact, I've forgotten what format to publish this in! In this case, no news is no news, I suppose, since I've not touched the models since completing the first cement car last summer. But not working on the layout doesn't mean I've not been busy elsewhere: a great summer with the kids, visitors from Australia, and too much time doing computer-related stuff--mostly getting serious about scanning a good portion of my 30,000 35mm Kodachrome railroad slides dating from the mid-1970s, as well as jettisoning the old Wintel PC for a shiny new Macintosh. Yes, I'd drunk the Kool-Aide. And yes, it is a fabulous machine.

What's Santa putting under your tree? I'm keeping it simple this year: a couple terabites of computer storage for all those photos. And crossing my fingers my wife will brave international commerce and get me a copy of the Wheatley brother's new book. The "other" stuff I can get myself, and I'm waiting on some SDS RACE containers, some Austrains WHX wagons, and I need to get off my duff and order some resin kits from Ian up in Hornsby.

All this building and scheming and acquiring of model railroad stuff, for many of us, wouldn't be possible if it wasn't for the Holidays in the first place. There was always a Lionel 3-rail train under our Christmas tree growing up: my father, expecting to have a son for his first child, loaded up on Lionel trains in 1954, shortly before--oops! this was in the day before ultrasound--my older sister was born. It was another six years until I came along; and it took a dozen years, but by Christmas 1973 I was in full-blown infatuation with model trains. Our local hobby shop--the kind with erector sets, model trains and a slotcar track in the back (remember those? before the internet shut most of them down?)--had an AHM Union Pacific passenger train set for sale, and I literally had dreams night after night about owning that.

It wasn't a big surprise on Christmas day when it showed up under the tree: my father had spent many an evening and a couple Saturdays building me a basic 4 X 8 foot oval of track, passing loop, and industry tracks, fibre flex track laid down on a baseboard painted in glossy green enamel grass and black streets. Finally, my dad had someone to share his love of railroads with. He wasn't too pleased when I, imagination stoked by articles in Model Railroader magazine, began changing the track plan around and kitbashing buildings into something else. His pristine sheet of plywood was no longer pristine. No matter. My commitment to modeling began, whether my father was pleased or not. And it's led all this way over 37 years, layout to layout, dalliance with one railroad and then another. It all began with that Lionel train under the tree, and really got going with those hyper-speed AHM Union Pacific E-units.

To all of you who bother checking in and reading this occasional blog, Happy Holidays, Merry Christmas, and all that stuff!!