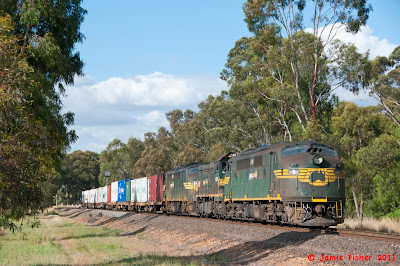 There isn't a lot of freight traffic remaining on Victoria's vast Broad-Gauge network, but what there is. . well, it's quite photogenic: A fine Jamie Fisher snap of Pacific National up Tocumwal-Melbourne service let by A78-P22-A81, Mooroopna, Victoria, 19 December, 2011. For us Yanks, the thought of a double-ended turbo-charged F-unit blows our minds!


It's been FAR too long since my last posts--just over THREE months! And, sad to say, apart from a few quick efforts at weathering the new Columbia Models BCW wagons, I've done little if any modeling in that period. Jeez, the workbench hasn't even been cleaned up from the last bit of modeling I engaged in.

I guess lots of that time has been daydreaming about a place where the Bulldogs still roam free. And in doing a little extra work on the side to pay for the opportunity to bring those dreams to realilty.

And the time before we leave on the big 747 with the Kangaroo on the tail for the 20 hour flight is coming up quicker than I can imagine. It was just coincidence that last Friday, while I drove Mary and the boys to visit family east of us, we passed the north end of Dallas-Fort Worth airport at ten minutes to 3p.m.--the exact instant the daily Qantas non-stop from Sydney swooped right over our heads, flaps down and fuel nearly spent. A flight we'd be on in nine weeks to the day returning from Australia. Six weeks to the day until we leave.

My fellow down under gunzel work-mate Lance Lassen and I bought the tickets in the first quarter of 2011, when Qantas was running a sale that got us round-trip for less than we paid for the same flight in 2009. This time, we're spending three weeks in Oz, a week more than in 2009. We're still expecting to keep way more than busy railfanning, taking in a footy game in Melbourne, visiting hobby shops, museums, bookstores, model railroads and, best of all, friends. This time, though, we're going to pay a bit more attention OUTSIDE New South Wales. 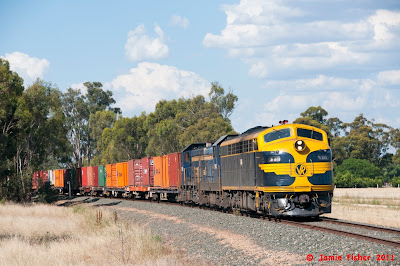 Okay, then how about a single-ended Victorian bulldog? In this case, Victorian S-class S313 leading a pair of blue-and-gold T-class, all leased from railway museums, on the pointy end of Up-bound El Zorro Delinquin-Melbourne train 9072, a Monday-Friday schedule, seen at Moama on 22 December, 2011. Again, Jamie Fisher nails it!


What could be better than NSW railways? With a record wheat-harvest expected in Victoria and South Australia, the railways there are quite busy for the first time in many years. While the 2009 trip to NSW concentrated on Alco-powered relics, we're starting off this trip in "Mexico," hoping to get a good amount of piccies of glorious Bulldog locomotives employed hauling wheat on both the broad gauge and standard gauge.

Operators P&O Trans-Australian (POTA), ElZorro, Pacific National, and Genesee & Wyoming Australia are scrambling to find power to keep the empty grain wagons rolling to port, and in Victoria and South Australia, as in New South Wales, you'll never know what you'll find. There's lots of new high-tech power on Hunter Valley coal trains and on cross-continent intermodal trains, but CWA's beautiful orange and black CLF/CLP and GM's are busy on the grain haul in and out of Adeliade. Next state over, former Victorian Railway B and S class EMD's are on home rails, some still in heritage paint and leased out by preservation groups, teamed with other former Victorian locomotives--X and C and G and strings of little T class. It's a great show!

Of course, our appetites have been justly whetted with regular dispatches through e-mail of photographs of these tasty photographic subjects. How can we resist? We're still hoping during the other two weeks of our holiday to see 48 class on rural branchlines in NSW and 44 class on trip trains and the odd standard-gauge bulldog as well running around. And it'll be hard to pass up at least a cursory look at all the colorful new paint schemes adorning cookie-cutter (ugly) new locomotives hauling coal in the Hunter Valley to and from The North West, where Lance and I will try again to at least tear ourselves away from the gunzeling long enough to take some "infrastructure photos" of the locations we're modeling in HO scale, the Narrabri and Gunnedah areas.

In the meantime, until we climb on the big 'roo February 17th, I've got a few more slides to sell, got a new camera to learn how to operate, and we've got timetables and Google Earth to peruse. And dreams of Bulldogs in the Malee and Rivernia country.

It won't be long now! 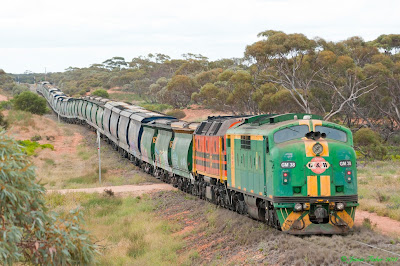 Lastly, but certainly not least, GWA GM38, still in Australian National paint, paired with an ex-NSW 422 class trailing the tail-end of train 1341S on the Loxton branch at Veitch, South Australia, 7 October, 2011--another fine photo by Jamie Fisher.

All Jamie Fisher photographs, Copyright 2011, and used with permission of the photographer.
Posted by B. Kooistra at 6:09 PM No comments: