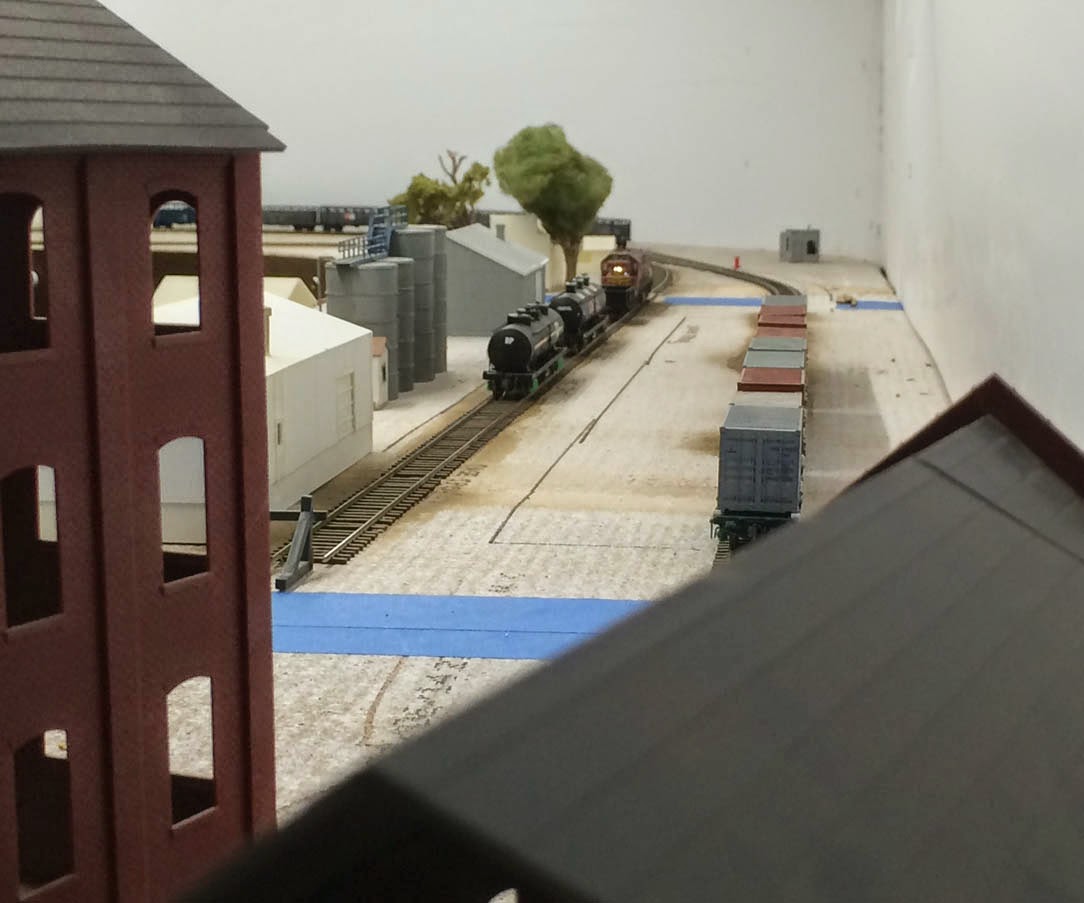 A 49 class working the Buggardine Goods slowly approaches a pair of fuel wagons on the Ampol/BP fuel siding. And, yes, if you look closely, you'll find there is an S-truck serving as a buffer car, per shunting requirements. This view is seen from an elevated position in the flour mill; the containers on the right are occupying the new cotton cooperative loading yard.

I've always thought there were three types of model railways: one that were designed to look great, with a lot of thought given in planning as to the visual aspect; those that were operationally interesting; and those that combined both elements.

One model railway that definitely offers both experiences of great operation and fantastic visuals, among several out there, is Ray Pilgrim's Bylong layout. The layout is incredibly engaging to operate, but to me what really sets it apart is Ray's eye for design: engaging the viewer and pulling them into scenes (which are expertly executed). Recently, Ray's blog featured a tasty selection of scenes on his layout. A few of these in the selection entitled "Bringing it Together" are wide views of swaths of the layout to put its design in context, but the majority of photographs were made not as if we were hovering 10 stories above the ground in a hot air balloon, but from ground level, as a gunzel would. The design of the layout is highly influenced by scenes inspired by railfan photography.

I'm going forward with Buggardine with the same emphasis as Ray, thought on a simpler, smaller scale: I want the operation to be smooth (don't want the process of the mechanical issues such as dirty track, rough joints and such to interfere with the operational inexperience) and as realistic as I can make it given my knowledge of the subject. But just as important, I'm designing the railway with several scenes that I hope operators will crouch down and put their eye at near track-level to enjoy while they're operating.

Here's a few scenes--in their early stages, again as I always say, mocked up to engage my own imagination and motivation to keep moving along.  These photos are on the terminus end of the railway, along the Oil Siding and parallel Mill siding. 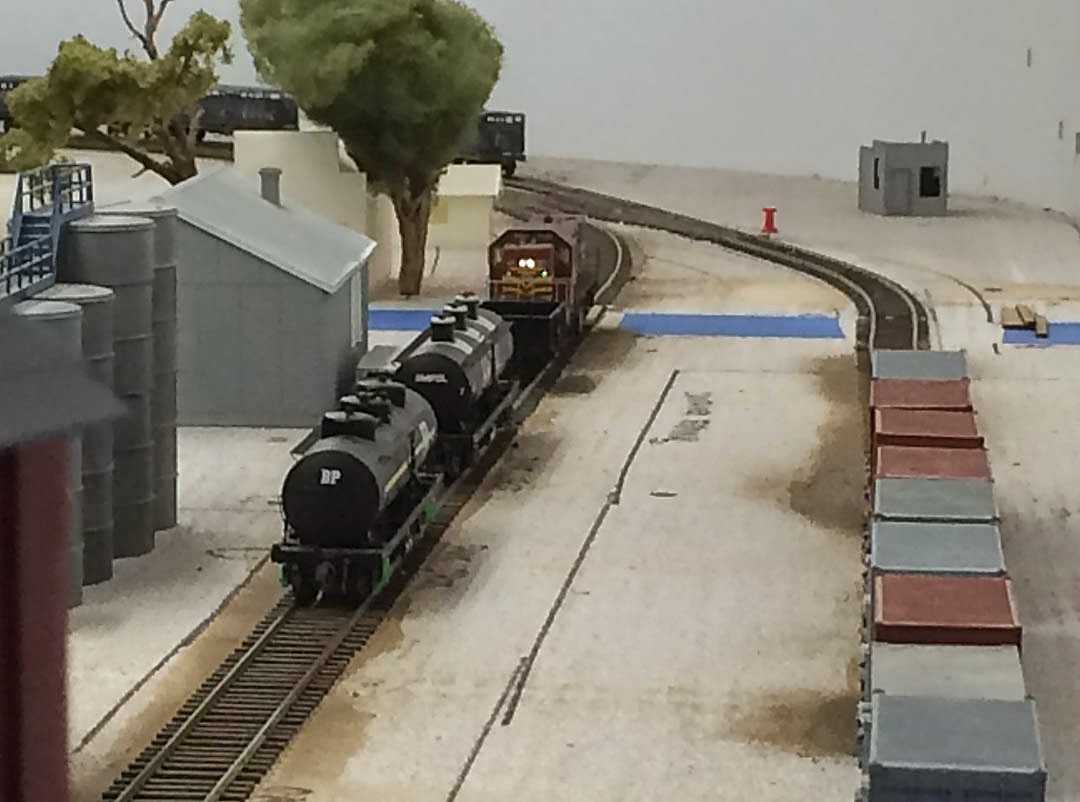 A tighter crop of the above scene, taken on the iPhone, which makes up for in convenience for a lazy modeler what it loses in picture quality (don't worry--when the scene is complete it'll deserve a retake with the "professional" camera). In distance is the livestock siding. 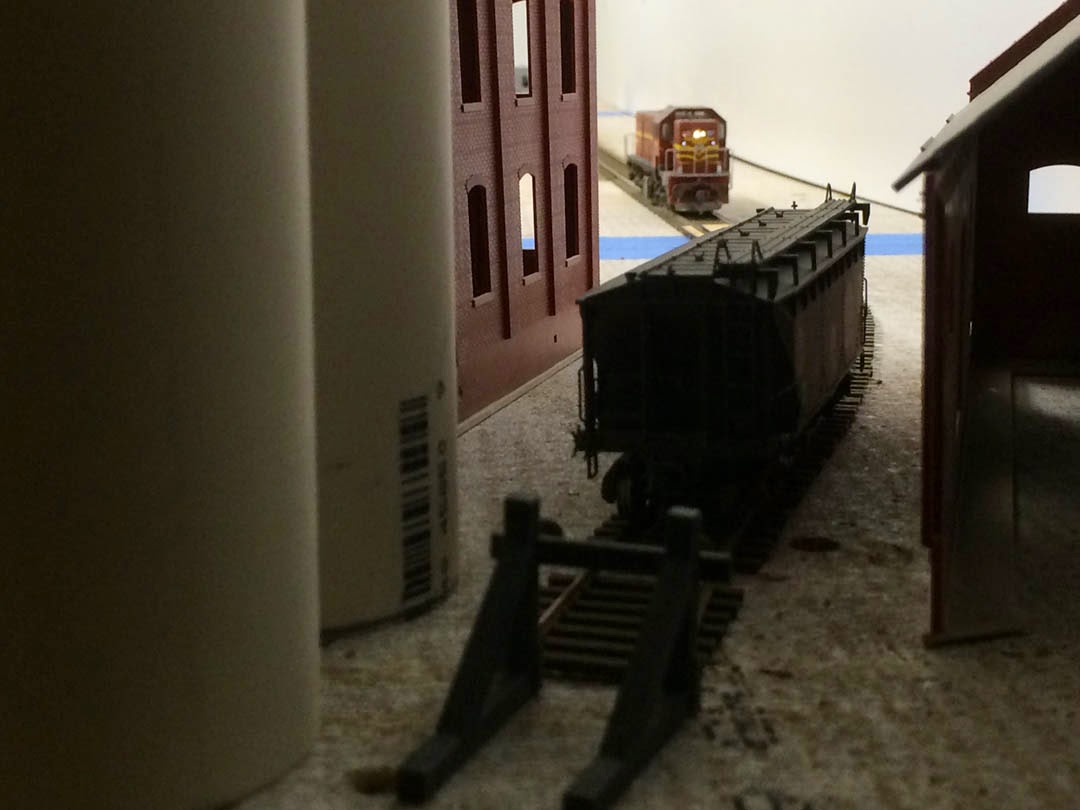 Now shunting the flour mill, the 49 Classes approaches the confines where an empty wheat wagon is ready to be pulled.

Since returning from the east, I've been a busy mofo' with the railway. I've been highly motivated to get the layout up and running, and not let construction and my interest drag down buy doing "too much thinking." It's been about six weeks since I started reconstruction with the open grid portion of the railway coming down the hill into Buggardine. Having reusable layout tops for the station district and terminus portions (just needed to have the old sub-roadbed replaced) and not having to change the overhead lighting valance much really kept things moving along. I was able to salvage all the points I needed and about 75% of the track I needed (that new track was the Micro Engineering c70 flex I used coming down the hill).

This weekend, I finished the track work (still have a little to go in the loco depot, as well as fine-tune some points, file down a few rough rail joints, etc.), installed the last piece of .060" styrene backdrop (though it still needs bondo on the seams, primer and a first coat of sky), added Blue Point point mechanisms and rod-in-tube throw rods, put up the layout fascia,finished the wiring, and hooked up the DCC.

We have a (new) railroad!

It was exciting to watch a 47 class come through the wall out of staging with a full load of FWH and RU wagons and into Buggardine, then shunt the wagons and pull the releases and return to staging. Magical!

We (almost) have a new railway! 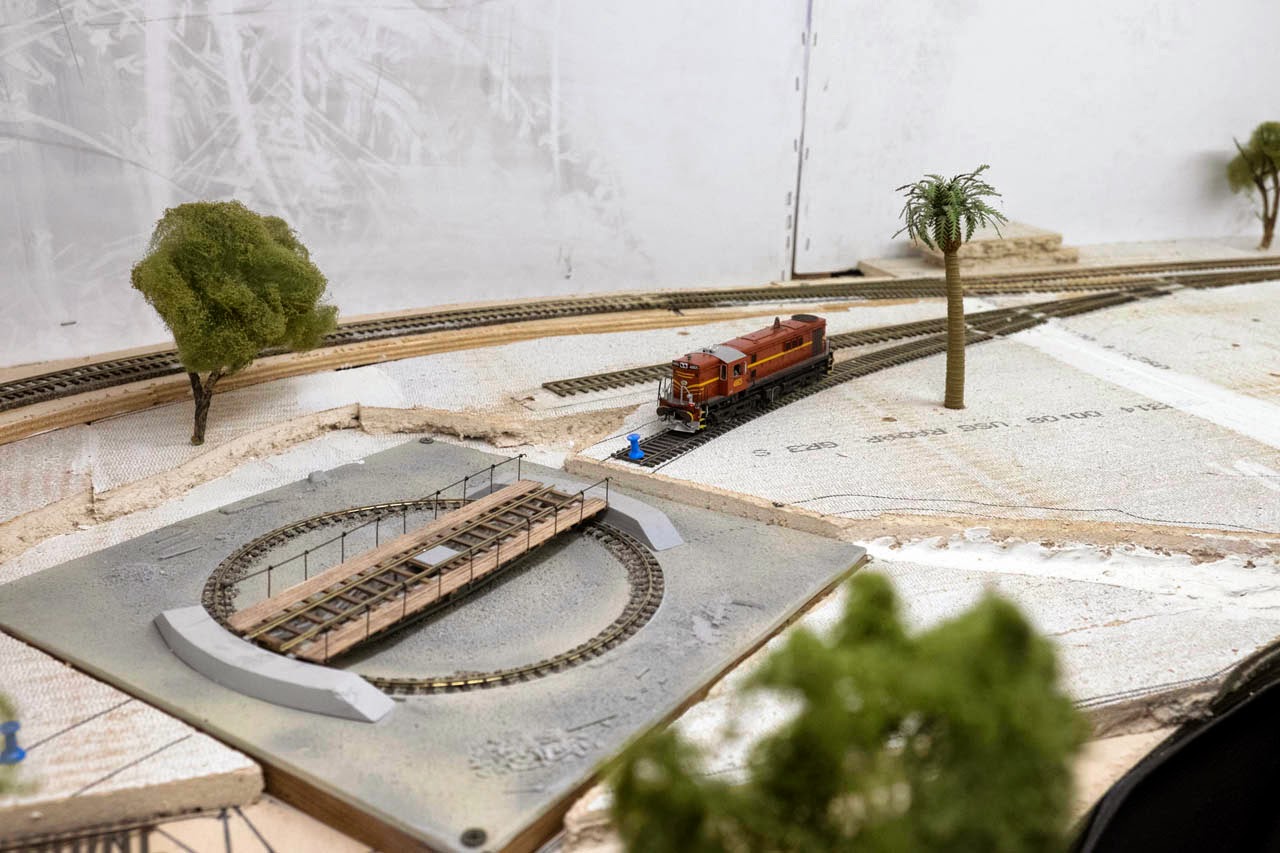 Buggardine's small loco depot. The turntable arrived from Mr. Anton in October. I was a little skeptical how well it'd survive the three-week, 8,000 mile journey, but his packaging was simple and completely adequate. Thanks, Anton!


Since returning from a photo safari to hunt down rare Alco six-motor locomotives in the mountains of New York and Pennsylvania last month, I've made a real effort to put as much work as I can into the new layout.

So, I guess I can work fast when I'm really into it. I tend to work that way: obsessive about pursuits for awhile, then they can sit dormant. Like in the case of North Of Narrabri--almost two years.

Now, the transformation of North of Narrabri into Buggardine hasn't been a tremendous amount of work, though it has involved taking down the entirety of the old layout and reclaiming chunks of it for use in the new project.

To wit:
The  track plan on the new layout has changed somewhat from the quickie sketch shared in an earlier post, though the basic concept has changed. Most notably, the view from the edge of the layout is now towards the front of the station, looking across the railway grounds from the grain siding.

I'm pleased by how it's come together; it was most important to me to keep the railway looking open and uncluttered and true to its rural setting. Veteran NSW photographer Laurie Anderson suggested that with all the tall grass I'll be static-placing between the grain siding and the station district, I'll have to be sure to include several large snakes slithering in the weeds.

This weekend, I've just about finished the trackwork. There's all the fussy soldering and filing and adding switch controls, of course, but the dirtiest, dustiest part of the construction--benchwork--is essentially done. I tossed out all the acquired extra lumber and did a big clean-up of the layout room. Next up: switch controls and wiring.

I'm guessing I might be able to pull off a running night by early December. This might well coincide with. . . 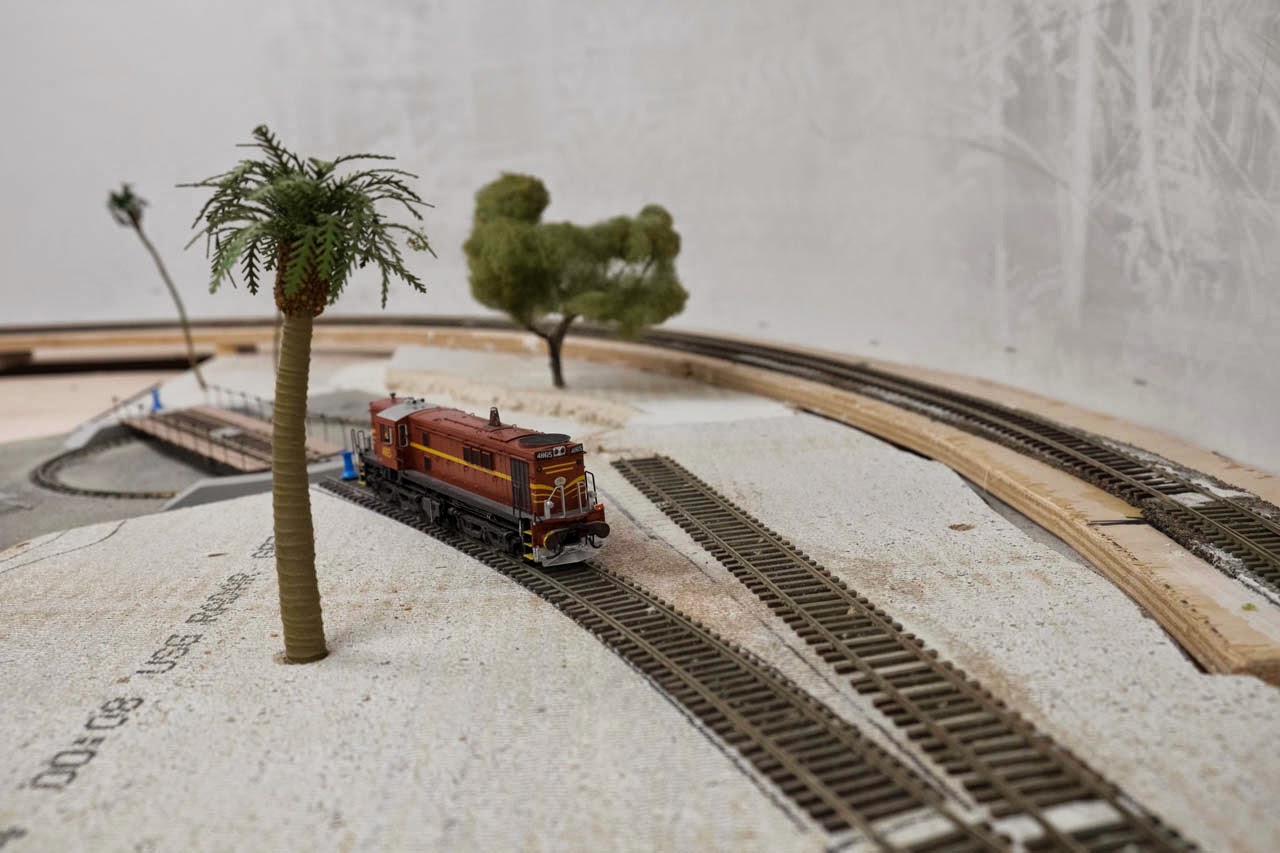 Another view of the loco depot. That's the mainline towards Mudgee heading up the hill in the background. Of course, needed to add the iconic palm trees around the turntable. 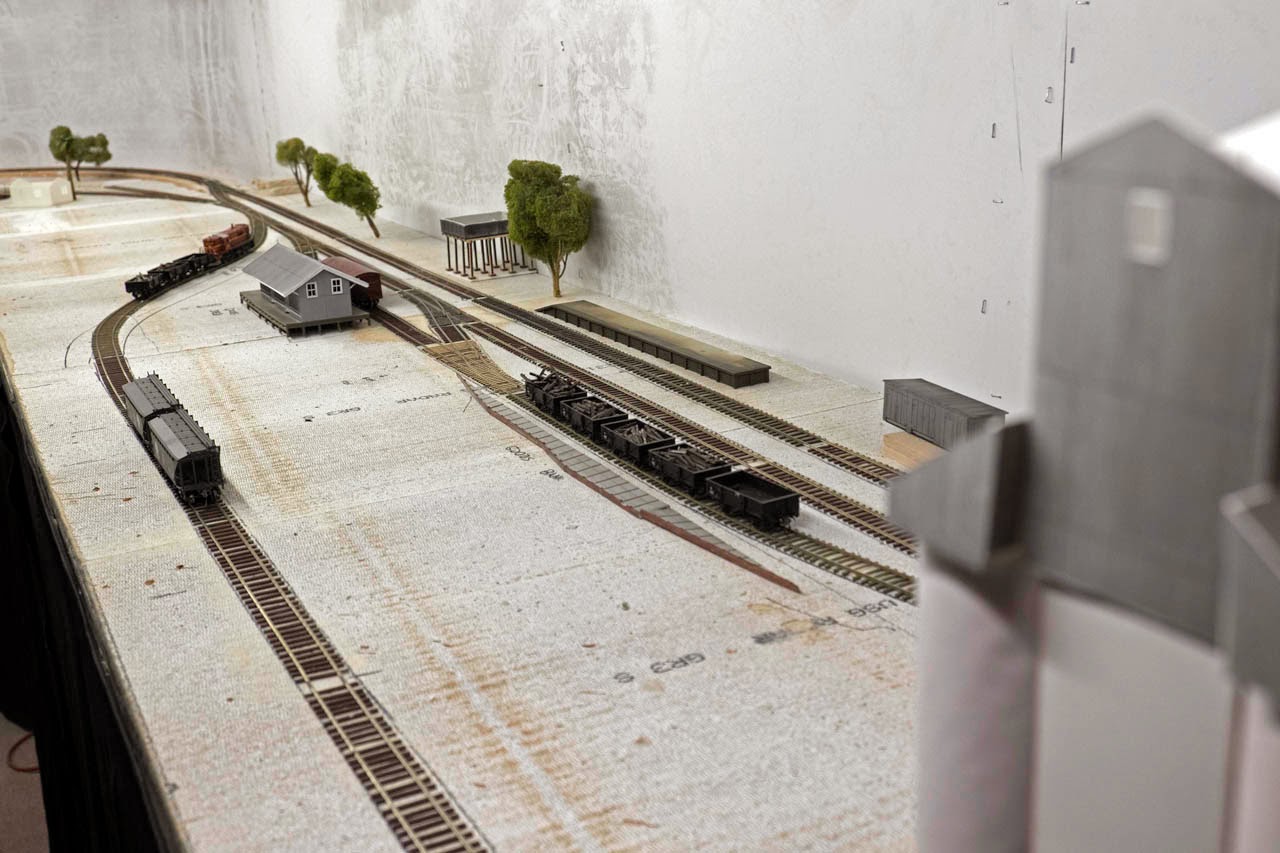 The "up" view of Buggardine yard precinct. Loco depot in the distant left; silo siding, good shed, goods bank, water tank, platform (where the station will be). Lots of room for static grass (and HO scale deadly Aussie snakes). 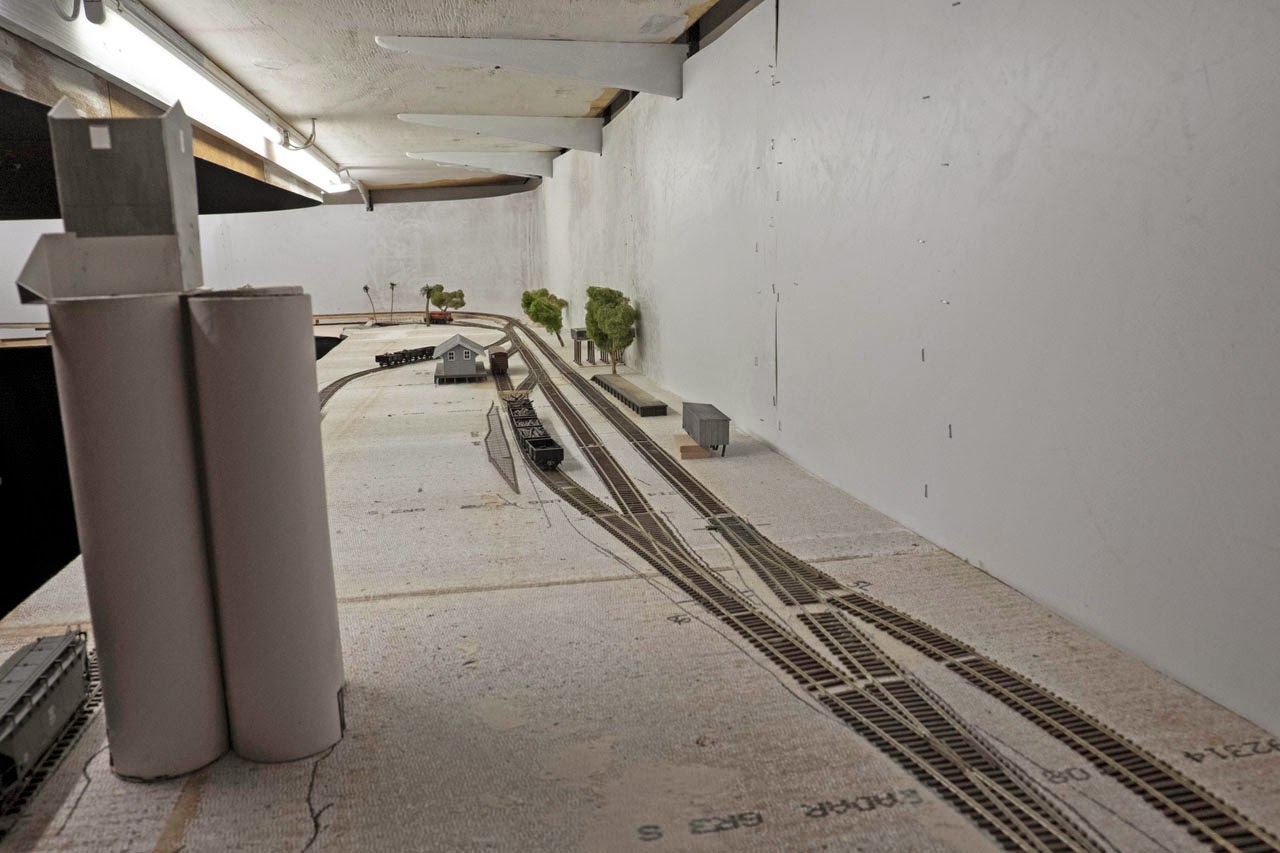 Stepping back a bit with another photo from my drone copter. . .here's the down end of the yard (terminus behind me, with the parallel sidings into "downtown" serving the flour mill and oil distributors). Spur to the far right off the main track is the livestock siding.

Good News From Tom's. . . er, Bob's!
Since it's been six years since I took advantage of the "Early Bird" pricing and forked over $660AU to Tom's TrainORama for three just-announced 48 Class, there hasn't been a ton of communication from the manufacturer on these models. Rumors, an update a couple of times a year--it hadn't been good as turmoil in the Chinese model railroad manufacturing industry has set this model back several years, necessitating several changes in factories, retooling, Shanghaied molds, etc.  I really wondered if I truly would ever see any models for the money I paid up front (something given the delays and trepidation, I'll never do again).


On to 2014: Powerline had since brought out their own "ultimate" 48 class, and earlier this year we were teased repeatedly by Auscision, who finally announced their own version of the 48 class--and offered their own "early bird" pricing, running around production schedule of several other locomotives, it seemed, to try to kick the stool out from under TrainORama (now owned by Bob Cooke). So, stay with TrainO or go with Auscision?

I wondered if indeed TrainO still even had record I'd paid for these models. Maybe they'd arrive and, thanks to the sale of the company, somehow any record for my payment had disappeared. So I sent them and eMail. . .and waited. . . and waited.

Yes everything is confirmed on our files - ie loco numbers, etc.

We will be in touch hopefully early December 2014 when they arrive.

So, THAT makes be breathe a sigh of relief a bit.  Good news. Maybe another month? We'll see.

Switching Command
Ever since taking the plunge in 2000 or so into Digital Command Control, I've cast my lot with CVP Products and their "Easy DCC." Keith Guiterrez of CVP first launched Easy in a Model Railroader series, and much of CVP's engineering became the basis for the NMRA standards for DCC.  When it came time to purchase a system, "serious" choices in the US were Digitrax and CVP. There was the Lenz system (but it was "European" and us Xenophobic 'Muricans are suspect of anything not from the US or China), and I think either Bachmann or MRC had their own system as well, but Digitrax was anything but "easy" and the Bachmann/MRC systems were crude and not very well thought out. CVP is Dallas based, and was the favorite of our best-respected area hobby shop, so the decision was easy. It was also the choice of many of the best-regarded model railroads in the country I'd operated on.

Apart from adding a couple radio throttles I'd done little to upgrade my Easy system over the years--it still operates with its original software. But efforts last year to upgrade and debug some issues in the system went nowhere: CVP didn't return phone calls or emails. It didn't seem they wanted my business. And in the meantime, the landscape had changed in DCC. Now North Coast Engineering was a big player in the game with their iconic "potato-masher" radio throttle, and MRC had broken through to produce a well-regarded system very similar to NCE's. Meanwhile, CVP, while still in business, seems to have become stagnant. Even the best-respected hobby shop doesn't carry them anymore (though this probably seems to be as much about a personality dispute between the hobby shop owner and Mr. Guiterrez, long-time friends who'd apparently had a falling out).

So I decided to change systems. I considered NCE, but I don't anticipate running more than a couple trains at a time on my railroad, and their wireless system was quite a bit more expensive than the MRC "Prodigy" system. True, MRC doesn't have ALL the features NCE does, but it doesn't cost as much, either. The fact that the new JMRI software has been written to finally give access to the MRC system helped push me in that direction.

I got the wireless Prodigy Advanced system the other day (through e-Bay--at a VERY good price, something you don't see on e-bay much any more), and so far, I'm quite happy with it. Rumors of the NCE-like wireless cab being difficult to operate with one hand have, for me, proven unfounded. I've ordered a second wireless cab. The system is so simple and compact. . .well, a lot has changed since the Easy DCC days, I guess. 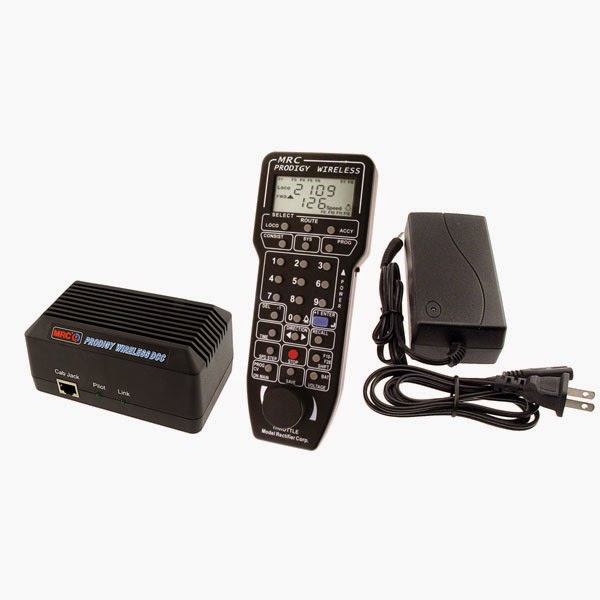