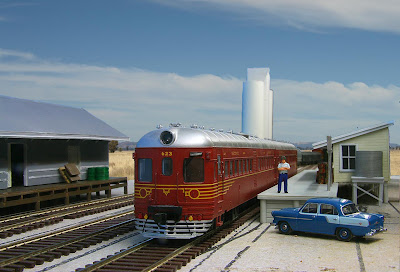 . . .just a little bit more as I goof off on the computer once again, and add a benign North-West afternoon sky through Photoshop and Flickr to pump up the realism on this shot just a bit more. Sure, no ballast or ground cover, but so far, so good. And thanks to Ray P. for inspiring me once more to take it a bit further with his contribution from the morning "inbox."
Posted by B. Kooistra at 7:44 PM 3 comments:

A Goods Shed for Wee Waa

The afternoon passenger train back to Narrabri awaits its departure from Wee Waa. . . a cloudless day, no doubt blazing hot. The residents sure could use a little Ray Pilgrim Photoshop sky complete with cooling thunderstorm!

Moving right along with the Wee Waa structure project. Got most of the station completed, and turned my attention to a "standard" 60' NSWGR goods shed. Many of the sheds, especially in rural areas, were built to a standardized plan, but with many variations such as length, type of roof, and the attached office. Wee Waa was no exception.

The goods shed is another piece built from Evergreen styrene. Windows and doors were salvaged from the "on hand" pile. I've still got to build a ramp for the good citizens to wheel their goods up to the top of the platform. The building isn't weathered yet, and I'll need to weather the timber base as well as replace a couple of the pilings that have been knocked off. But it certainly looks the part, doesn't it? (Chris Nelson's website has a photo of the actual item, circa 1975). 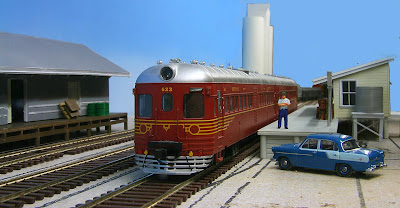 Here's the "Country Railway Stations of NSW" view of Wee Waa. Seems the station master gotten fed up with the Galahs crapping all over his Holden and has chopped the big shade tree down. He's wearing a regulation white shirt since being written up by the inspector for wearing a non-standard green shirt on the last surprise visit. Still has to put a blue hat on, though. . .

Since our last visit, I decided on painting the station a faded shade of the standard station yellow used into to the 1970s. The actual station by the period I model--1978-82--was painted in a very light gray with white trim. . .utilitarian, and cheap to paint, no doubt, but rather drab! So, I'll throw prototype adherence to the wind in this case. I hand-painted a couple of light layers of a cheap acrylic paint found at local craft mega-stores and Wal-Mart, the Ceramcoat brand. $1.39 a bottle. The shade is "Butter Cream," and it looks like the faded yellow structures found throughout the Country Railway Stations of NSW books. I brushed it on since I was too lazy to haul the air compressor upstairs and set up the airbrush! But it went on smooth and even.

Much yet to do; my Sentinel 5-tonne goods crane has been assembled and it's just looking for an appropriate concrete base. And that station building needs a good earthen bank to sit atop; then there's the load bank, and . . . .well, enough to keep me busy.

All for now. It's approaching midnight, and "real world" railroading calls in 6 1/2 hours. 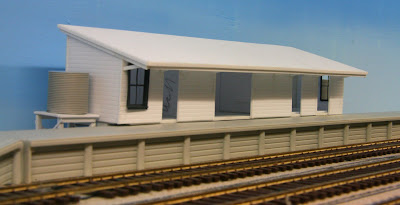 Ah, that's much better! 3/4's of the way done, the Skillion-roofed A-4 depot, similar to Wee Waa. Of course, the doors and windows aren't all in place, the piping to the water barrels isn't in, either, and it needs to be painted. . .

As much fun as I had putting together the basic walls, floor, and roof of the LJ Models A-4 Skillion roofed cardstock kit that made an appearance in the last installment of this journal, it soon became clear that cardstock kits, for the most part, are best when supplanted with strip wood or styrene enhancements. Let's face it, cutting and gluing four layers of cardboard together to make one beefy wood stringer for the foundation is a tedious and not-too attractive alternative to just opening up the box o'plastic strip for a more suitable replacement. And you'd still have to paint it.

So the more I thought about using the LJ kit as a core for the Wee Waa station, the more I decided I'd much rather start, um, from "scratch" and use the LJ kit as a template for an easier-to-build and much heartier styrene version.

I'm quite comfortable with a pile of Evergreen plastic, a paint brush, Xacto knife and straight edge, and a small bottle of M.E.K. for solvent--in fact, I rather enjoy scratchbuilding. 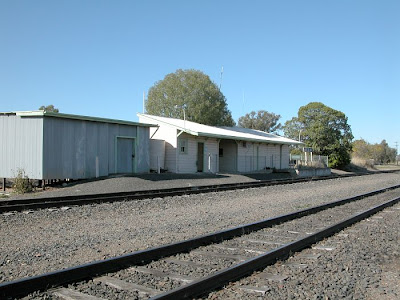 I used various Evergreen sheet and strip styrene stock along with Grandt Line doors (#5058) and windows (5117--slightly larger than those on the LJ models cardstock sheets), and scratchbuilt the "out ofs" cargo room doors.

Side elevation of rear of station. .

I have several view of the front and ends of the station at Wee Waa, but none of the "backside" that faces the aisle of the layout, so I went on the assumption Wee Waa was built to the "standard" A4 plan (there are a couple of small variations on the prototype vs. the LJ Models version,largely a window on the Out Ofs end of the station and a different-shaped window for the ladies bathroom). 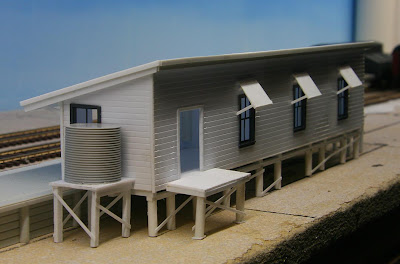 3/4 rear corner view, of the station end with the additional window in the Out Ofs office. . . 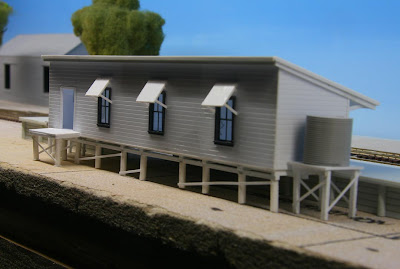 There's still a bit more to do before it's done of course; I need to paint it, but am unclear as to what colors it wore in the late 1970s, though a tight platform view on page 33 of Vol. 5 of Country Railway Stations NSW by Train Hobby Publications shows it wearing a very pale yellow tint, with white trim--a much lighter shade than the yellow printed on the LJ cardstock. . .an effect of bleaching in the sunlight? A photo from the same period of Narrabri on the inside back cover of the same booklet shows it wearing a more rich shade of yellow, with yellow trim work as well as a yellow-painted galvanized roof. Should the metal roof at Wee Waa be painted? Yellow? White (to reflect sunlight, seen in many stations in this book series)? Or left natural metal? And what about the interior rooms? The big windows will at least allow the interior walls to be glimpsed, and I've modeled the open frame wall exposed in the waiting room--what color should these rooms be? Photos inside the Narrabri station staff hut I took last year show the pale yellow color scheme carried indoors as well.

These color questions help delay the painting, but I don't mind too much as I'd rather have a few more structures ready for paint in the same session than setting up the airbrush for one building to paint! The building will be painted, interior walls and windows separately, then final installation will take place, wit a big of detail painting coming before placing it on the layout.

Broadside track-side view. . .the side you'll never get to see once it's installed on the layout!

Like I said, I enjoy scratchbuilding. Off the top of my head, I came up with over 25 structures for this layout I'll either have to kitbash or scratch build. . .not that there's anything wrong with that. And few of them will be cardboard.