PRX for your cement? 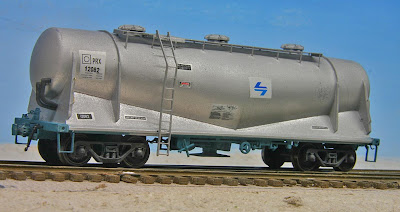 Needing a bit of weathering and good to go: the AR Kits PRX with Keiran Ryan walkway and ladder kit.

Just about finished with the first of two ARKits PRX code pneumatic cement wagons. This model represents a car from the first of three orders from Mittagong, circa 1979. It's equipped with interstate bogies and wears PTC teal blue ends and underframe.

These cars were just being delivered during my era of modeling, so they'll require only a light treatment of weathering. The supplanted the cylindrical ARX cars (not available as a model, but have at it with a CH or WHX as a source for kitbashing), but will look good riding the through goods trains to and from Moree, as they seemed to accumulate in small blocks. The cars are still going strong 30 years later, though beat to hell and now thoroughly caked in cement dust.

The ARKits model has been out a few years, and is an easy to assemble, if somewhat crude, representation of the car. You'll often see these show up on layouts in the pages of AMRM or at exhibition railways, usually assembled right from the box with hideously thick ladders and walkways. The underside of the model isn't much better--there's little attempt to represent anything more than a crude arrangements of plastic blobs for the air reservoirs, and missing entirely is the crazy maze of air lines running all over the place.

Thankfully, Keiran Ryan rides to the rescue with a nice brass etch of the walkways and ladders, both easy to place and assemble (his additional drilling jig for the walkway works like a charm as well). Using just the ladder and walkways will elevate this model considerably; he also includes corner stirrups and additional detail for the brake spider.

Most folks won't notice the lack of any real detail under these cars--why would they, unless your model ends up on its side, eh? However, the photos on Ryan's website for the detail features several views of the underside of these cars. . .taken, wouldn't you know it, of a car on its side after a dustup.

I am not a fan of silver acrylic paints, as they often are very "grainular"in appearance no matter how well mixed. I fell into this trap once again by painting the car with Polly Scale Bright Aluminum. This didn't look too good, so I elected to strip the car and use Floquil laquer-based Bright Aluminum. Stripping the car was made easier by the lack of adhesion of the Polly Scale on the slick AR plastic. The Floquil paint went down very smooth and with a reflective lustre matching new aluminum. With a bit of dull coat from a can, it knocked off the sheen and gave the car the slightly oxidized look I was after.

This car is far from perfect; the roofwalk is a bit wavy and I goofed on the stand-off distances for the ladders to the roofwalk platforms (hint: they're different on each side). But it was a good learning experience and I look forward to the second car's construction. They look so cool, I might just need three or four. 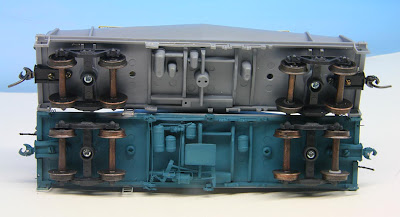 
Visitors from Down Under. . .

I often joke that being one of the few Aussie modelers in the US means that it's very unlikely anyone visiting the layout will "count rivets" on me and tell me I'm doing something wrong.

Unless a modeler from Australia visits the layout, of course.

Which happens next week for the first time when we welcome John Gillies of Canberra to Texas. He's on a month-long holiday in the states with his three daughters, and we look forward to seeing him again (we met up in Gunning when I visited Oz in 2009). Now, John's too nice a guy to show me up and call attention to an inaccuracy in my Oz modeling, probably, but I luck out this time since he's a Victoria native and a modeler of US prototype to boot. Burlington Northern, it turns out. The railroad I grew up next to. So I'd try to be nice to John, too, and hold my tongue when I visit his layout on my next visit down under. Not that i'd have to--John's an excellent modeler and thorough researcher. And a helluva nice guy. As long as I don't wear a Geelong jersey (he's a Hawthorn fan).

We look forward to stuffing the Gillies clan with Mexican food. Maybe some agave? I wonder if he'd swallow the worm?

Welcome to our part of the world, John, Melissa, Caitlin and Thea!
Posted by B. Kooistra at 1:26 AM 3 comments:

Dunno if my Aussie readers are familar with the Lay's Potato Chip and its' ad campaign of many years ago, in which a snacker confessed that they were so good that "no one can eat just one!"

I'm thinking I'm that way about building rolling stock. I finish a few wagons, get the unmentionably messy workbench cleaned up. . .and then more arrive in the mail or just sort of "accidentally" fall off the shelf to work on.

So much for the vow to work on roadbed, points, laying track, etc.

My excuse: I'm waiting for more PC ties and rail to get back to track laying.

In the meantime, what's on the workbench:
The Cement hoppers will get the Keiran Ryan etched-brass ladders/roofwalk treatment as well as an attempt to improve on the "molded blob" brake components on the underframe.

The OCX/OCY is an interesting comparison between two nearly-identical pieces of equipment by different model manufacturers. And one is definitely better than the other.

But, photos and all that when I get 'em done.

Back to the workbench. And--can you imagine this?--there's live AFL premiership action via our ESPN2 satellite network between Richmond and Sydney Swans. If only I didn't get rid of that tube of Vegemite!
Posted by B. Kooistra at 12:54 AM 3 comments: