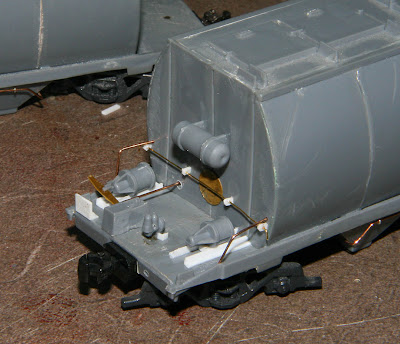 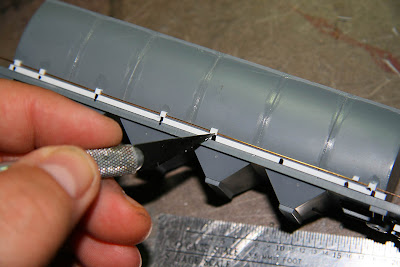 Using a jig, I added eight slices of 1.5mm styrene channel (Evergreen 261) on one side of each car for the slack-adjuster rod to ride through.
Posted by B. Kooistra at 10:27 PM 2 comments: 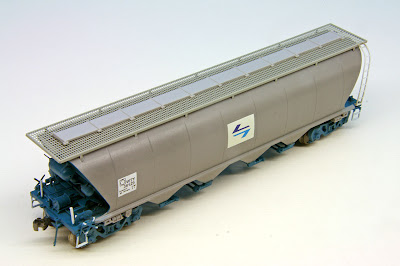 
Actually, that's not quite true.

This is the first of the painted WTY conversions of the Auscision NGPF models to roll out of the shops here in Texas, with eleven more to follow. Though it looks pretty complete, it still hasn't been weathered, and you can't really model the WTY grain wagon without weathering it up to some extent!

The fleet started as undecorated NGPF's purchased with an eye towards modifying them to as-delivered WTY codes circa 1979. I'd procrastinated on getting started in modifying and painting them, instead putting my modeling efforts largely into building a suitable layout to run them on. But now that I'd got that monster under control, I have no further excuses.

Backdating them involved removing the air rams between hoppers, hopper discharge controls, and additional air lines on the sides and ends added to the WTY/NGTY's in the late 1980s. I replaced the supplied couplers with Kadee #78's, and will replace the too-thick wheels with Intermountain 36" .088" semi-scale wheelsets when available.

The shiny aluminum of the new cars in 1976-77 weathered quickly down to a dull medium grey by my modeling era, 1979-80, and I used a mixture of Floquil Polly-S Undercoat Lt. Grey and Grimy Black. The roof hatches are straight Undercoat Lt. Grey. The blue on the ends, grain hoppers, and discharge gates is a mix of Polly Scale D&H Avon Blue and GN Glacier Green--it's what I had on hand, and it looks pretty good to my eye. It's been lightened up a tad with a bit of white. Of course, most of the blue won't be visible once a couple of years of wheat dust and road grime are added. I used Ozzy Decals #1055B for the "L7" herald and created my own code board in Photoshop on an ink-jet printer.

The blue paint in hard-to-reach places necessitated removing the discharge gates (48 total on 12 models, most of them very securely glued at the factory). I also removed the side ladder (and didn't break one!), roof walkway and roof hatch assemblies to paint separately and make the job of masking the ends easier. Given the many, many parts on this model, I'd much rather wrestle with a few parts to remove, paint, and reassemble versus building this thing from a kit to begin with!

Most of this would not have been necessary had Auscision released the WTY/NGTY to begin with, but they didn't of course, though their advertising now shows they're in the pipeline. . .for an undetermined time in the future. I figure my working on them will help Auscision push a second-run up the production line.

I'm in an active model-building mode the likes of which I haven't experienced in a few years, attempting to get a number of NSWGR models built, painted and weathered to exhibit at an upcoming "Prototype Modeler's Meet" in Fort Worth in late May. I'm hoping to be the only one these exhibiting Australian models (ha!).

After a string of WTY (I'm aiming to present four at the exhibition), I'd like to work on completing:
Two dark-horse projects may or may not be ready in time: a TRC refrigerator car, which will need extensive underframe and brake component detailing; and one or more WHX wheat hoppers, which have been giving me nightmares thinking about fabricating the brake rigging on the very-visible end platforms.

I'll also have on display the on-going project to construct and power a Stephen Johnson models 400 class motor car.

That's a fair amount of modeling to complete in the next month. I'll certainly do what I can to best represent Australian modeling to this little part of North Texas.