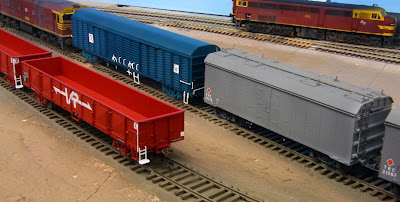 After a couple of months of true "modeling"--building kits, adding detail, painting, and weathering--of rolling stock and locomotives, it was pretty damned nice to open some packages from Australia the other day and taking out beautifully built, detailed, and painted ready-to-run freight wagons. Too easy!

New to the roster are a pair of Austrains Victorian Railways ELX open wagons (we Yanks call them "gondolas" and a pair of Auscision KLY 55' louvre vans. They're both perfect for my era, the ELX's dating from the early-mid-60's and the KLY's from the second order for these wagons delivered in 1975-76. The KLY's are from the same time frame as the WTY grain hoppers, which wear the "L7" two-toned blue PTC logo. The Aucusion KLY's wear the earlier "Rocking R" logo. I've never actually seen a photo of a second-order KLY with the Rocking R, and found it curious that both logos would be delivered simultaneously. I'm sure Auscision got it right, I've just not seen any photographic proof of it!

Both of these cars are spectacular models. I'm familiar with the quality of the Auscision stuff, so that was no surprise to me. This is the first rolling stock from the new-era of Austrains imports I've purchased, and was quite pleased as well. I'm going to have to come up with suitable loads for these ELX's to hide the lack of detail on the interior sides of the models--the only thing distracting from an overall "perfect 10" in my opinion.

Not all the packages arriving on the doorstop in this flurry of model railway purchasing were ready to run--Joe Callipari got my order together for 10 Casula "S" truck kits with proper .088" SEM wheelsets. I'm waiting for a pair of OCY container flat and a pair of PRY cement wagons from AR Kits and at some point the very cool new RACE containers from SDS models (perfect on the OCY flat on the headend of the North-West Mail!). 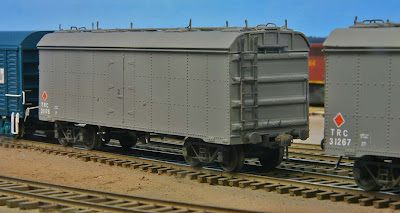 Workaday, not too flashy at all: a pair of detailed/scratchbuilt TRC using the TRAX/Silvermaz wagon body. Weathering is still to come.

Still lingering on the "to do" list of cars for May's prototype model exhibition but not finished on time were a pair of TRAX/Silvermaz (Casula) TRC refrigerator wagons. I'd purchased one on e-bay for cheap a few years ago and did a basic assembly (sides, roof, top, underframe with couplers and trucks) of it for use on the layout, and picked up another one new from Joe last April. When I finally readied to build one "proper" (with semi-scale couplers and reasonably complete underframe and carbody detailing added), I discovered that the underframe was basically a crude, inaccurate chunk of plastic, and figured I could do better. But where to get plans? I turned to Ray Pilgrim and Bob Stack, who were both gracious enough to scan two excellent Peter Jarvis articles on modeling this car from the June 1996 AMRM. VERY thorough treatment of detailing this very basic model.

I'd just about had the basic underframe assembled from plastic sheet and forms when Bob alerted me to a resin casting kit created by Ian Radcliffe and sold through his IDR line at Hobbyland in Hornsby, NSW. My timing was not quite perfect! The casting kit looks quite nice and hopefully should be readily available soon. (And those KHG brakevan and CF/KF four-wheel flat wagons he sells are my current infatuation!)

I followed most of the step-by-step directions in the article and came up with a quite nice model.

It certainly holds up well next to the Ready-To-Run Chinese wagons, and with the time and effort invested in it certainly gives me a bit more pride in ownership.


Cost vs. value vs. detail vs. modeling time vs. ultimate modeling satisfaction?

It's clear that Australian model railroading has moved light years ahead from what was available when the TRC was originally offered, probably 20 years or more in the past. It's amazing that the rough approximations of under frames not just on the TRC, but, for example, other kits like the Mini-Models BCW's were seen as cutting edge in their time. Amazing still is that these kits are still available new--the TRC from Casula and the BCW from Berg's, the marginally-detailed AR Kits WHX--for a considerable sum, $25+. Are these prices out-of-line for what you're getting, considering both the level of detail on the under frames (or lack thereof)? I'm guessing both of these kits have long since earned back their initial cost of development.

I'd certainly like to add more TRC's and BCW's to the fleet (that article in a back issue of AJMR about super-detailing the BCW really has my attention), but the costs of such crude kits give me pause before ordering more. But what can you do? You either accept that these are the only models of these cars available and pay the price, or you wait on the hope that one of the R-T-R importers will bring in a much-pricier--but much-better-detailed--car in the future. . .whenever that will be. What's the pride of ownership worth to me in a kit that I took to a much higher level of detail?

I'm not sure of my own answer to this one. I certainly like just popping a box open and having a nearly-100% accurate car, right there, in front of me, ready to go onto the tracks. At the same time, I like the fussing with wire, and styrene, and brake cylinder castings, etc. I appreciate that the "classic kits" are still available, and that small businessman/modelers like Ian Radcliffe are supplying smaller-runs of specialty modeling kits.

I do know that if I devote much more time to building up my fleet of wagons (let's see--10 S trucks, at least six more WHX's, and another half-dozen assorted Mini-Kits BCW's and AR Kits models on queue!) I'll never get the railroad itself built.

And the layout, now that i've got all these nice cars to run, is what REALLY needs the immediate attention!

That chunk of plastic on top of my model is the original underframe supplied in the TRAX/Silvermaz TRC kit. With the proper reference materials, I came up with something a bit better. . .