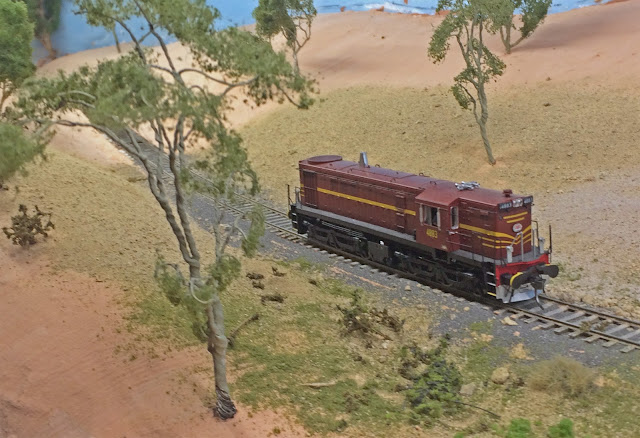 Some scenic material sprinkled into the scene, just to take a look.

Look at the photo above and help me decide. There's really three shades of earth tones here, and not sure which will be the most effective. First, there's the tinted joint compound color, which I've liberally painted the layout with. It's probably as good a match as I could get in the Behr line of paints from Home Depot in a can. Then, there's the stuff that looks sort of like a greenish tint of ground cover: that's REAL dirt from Texas, gathered from a construction site a half-dozen years ago where earth movers and trucks had smashed it into as much of a powder as I could find. The there's a greyish commercially sold ground cover called "Kiabab," seen just above and to the right of the locomotive's nose.

Viewed separately, any one of these colors looks like dirt. But compared to each other, they look radically different. Assuming the layout surface is "most correct," the real dirt almost looks like an organic material, it is so green by comparison. And the Kiabab, which looks almost yellowish while in its plastic pouch, looks fine and grey, almost like ash.

So what's the solution? Should I stick with the joint compound color as the ideal? Should I screen, sieve and use the big bucket of Texas dirt, hoping its overwhelming use on the layout will shift my eyes with time into thinking it is more dirt colored than organic color? Or should I use the grey Kiabab?

I could always use the real dirt and paint it when it is on the layout, but that'll be a chore. No one said this scenery stuff would be easy. I'm guessing once the whole layout is covered in the real dirt, it won't look so green anymore--and will look less so with the addition of other scenic materials representing field grass, weeds, grass tufts, etc.

Otherwise, this is the progress I've made in a week. The raw shaped foam has been sanded, covered with plaster cloth and then covered once more with tinted joint compound. I used a pre-mixed USG brand that apparently can be stored for several months (scrape off the icky moldy top surface however), shapes very well, takes latex paint as a tint like a champ, and sets up and dries in a day--with the added bonus that if you need to reshape something, simply wet it and it is again workable. Very cool stuff. By now, 90% of the layout surfaces--hills as well as in Buggardine itself--has been given at least a thin layer of this stuff. Looks great. Another step forward.

Once I can decide on the base dirt ground cover, we can get along a bit further. But each step I move ahead, the more enthused I am this the railway is moving beyond  Plywood Pacific level.
Posted by B. Kooistra at 11:42 PM 3 comments: 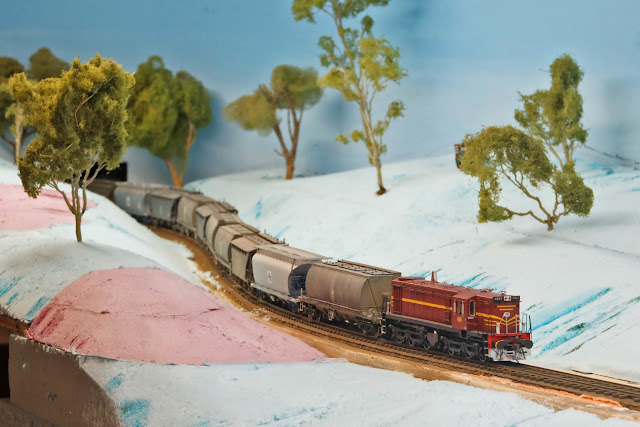