Here's a rather crude panorama view of the layout room (click on the photo for the "big picture") with the upper level and lighting valence in place. I'm still waiting for a couple of the T4 ultra-slim lights to be delivered from LightingXP (they've got a new website; same great service and prices, and free shipping in the US for orders over $75). I haven't painted the backdrop on the just-built helix "blob" blue yet. Lance was over and we sorted through the remnants of lumber and decided what to keep and what to consign to the dump.

We should be ready to start with the lower level benchwork next week. I'm still hoping to get the lower level benchwork in place by the end of February; at this pace, we shouldn't have any problem meeting that self-imposed deadline (I want to get that done before the boys start their spring baseball leagues in March--time will be at a premium then). 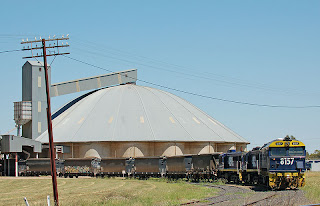 Photo by &Drew via Flicker of Pacific National grain train loading at Narrabri "A Silo".

"Laws are like sausages, it is better not to see them being made."
-- Otto von Bismarck

And for that matter, so is model railroad benchwork. Some modelers, I'll admit, are fabulous benchwork-builders--it's almost a shame to cover up their amazing spline-roadbed creations with trackage and scenery. I don't fit into this category. I take a little open grid here, a tad of l-girder there, and eventually, I get something that works. Like that helix--it was like wrestling with a pig, but finally I ended up with something acceptable.

Lance and I tackled the railroad above the helix last week: this will be the location of the large circular "A191 Silo" grain elevator which on the prototype is on the south side of Narrabri, near the triangle leading to Narrabri west. The actual elevator complex is really three components: the large circular "A191 silo", built in 1955; a two-silo-plus-headhouse elevator, added at a later date, and a large metal grain storage building. I'm modeling the first two. (Kieran Ryan's Silo Data page has a rundown of all circular "A" silos constructed.) 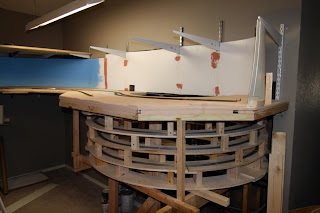 The helix has a lid, which almost floats above the helix structure itself, attached at four points to the helix frame as well as to the wall. 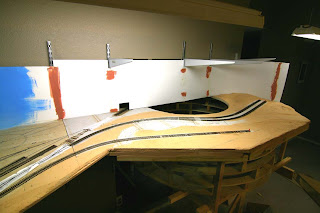 View of the silo area looking into the helix hole. Big "A Silo" elevator will fit into the semi-circular hole. 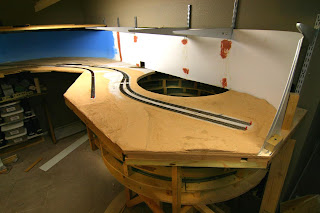 Better view of the trackage on the helix blob. The single track to the left will serve a Superphosphate distributor and oil jobber.

I don't yet know the actual dimensions of the prototype A Silo; in scaling off of photos, including Google Earth and Google's "Street View," it appears there's 18 cylindrical silos arrayed in a circular shape; i'm guessing the structure is around 250-300' in diameter; I've left an 18" radius half-circle cut out in the middle of the tabletop atop the helix, which I will be able to build the silo on at the workbench.

As of this afternoon, trackage is mostly down; the connection to the helix has been made; backdrop is up but not yet sanded or painted, and i'm ready to put the lighting valance over the top. Later will come fascia material enclosing the helix in a tidy sheathing with an inset DCC control station built into it. 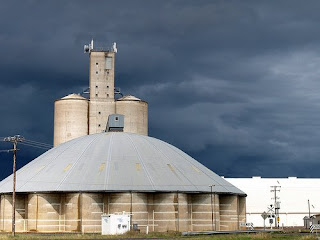