I know it's been a good long spell since I last updated this blog--but I don't feel too bad in comparison to some of the slackers whose blogs I regularly check--but just a quickie here to say that I'm still alive and while North of Narrabri has got a fine layer of dust upon it, it won't be long until I pick up the pace and get back into the layout room. A visitor from Canberra will be here in a bit over a week, so that's inspiration to get the layout room habitable and the railway operable.

Sometimes, life intervenes. Sometimes, interests wane a bit and you wait for the right inspiration to bring you back to them. I've been fortunate to be blessed with a great wife and two, er, interesting sons. I've also been fortunate--or maybe cursed--by being a guy with a good many interests. Unfortunately, these interests pull at my spare time. I've only got 24 hours in a day just like everyone else. I'm lucky that my job doesn't demand more than 40 of them each week.

I will allow that more of my time that I'd like to confess to has been squandered in front of a computer for the past several months (damn you Steve Jobs, for your iPad!). My photography interests--more often meaning the archiving, scanning and cataloging of over 30 years of railroad photography--has eaten up a bit of time. And after seven years in our home, Mary and I decided to dedicate the last half of the summer to fixing it up a bit, painting rooms, redecorating, getting some projects done that should've gotten attention awhile ago. All the while considering whether it' might be time to move to a new/old house. There ya go: another new hobby, that of mid-century architecture and furniture. Like I said, there's only so much time.

I'm aware than many of us of the train persuasion also enjoy other types of transportation--if it moves, I'm probably at least marginally interested in it. And I know a couple of you out there shut down the layout at night and squeeze in a little virtual flying. So for those who love the vintage war birds or just love aircraft, here's a photo from last weekend's airshow at Alliance Airport, about five miles from my house. Two of my favorite fighter jets did a "heritage" flight for the show, and here's Friday's practice trip, with a privately-owned F-86 Sabre Jet paring with a still-active U S Air Force F-4C Phantom wearing South East Asia camo. I don't think these two jets were active concurrently; but being as the F-86 dates from 1949 and the F-4 as early as 1958, I think you could still call these "steam era" jet aircraft! 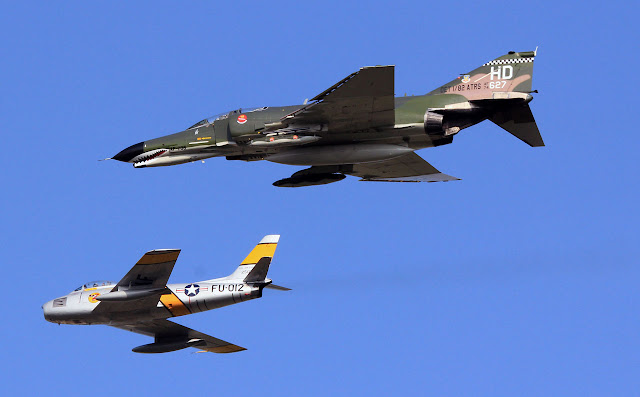