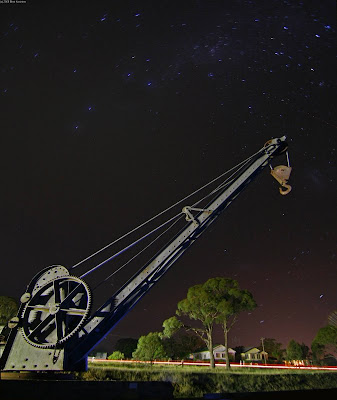 This photo has nothing to do with anything in the below post. . .but is IS of an NSWGR subject, the 5-ton goods crane at Gunning. April, 2009.


I actually accomplished quite a bit this past weekend. Fine-tuned a bunch of hand-built points that were giving me fits (adjustments of point gapping, wing rail/guardrail clearances and gauge issues on the diverging routes, all easily fixed with file and soldering iron). Painted trackage I'd put down last week in Gurley. Added the Blue Point controllers and control knobs. Glued down the ceiling tiles and sculpted them into a loading bank, as well as sculpted the scenery in Gurley, and covered it all with a layer of brownish-earth colored latex paint.

And have removed three of the Fast Tracks "Bullfrog" switch controllers (reviewed here) that had, in the course of a year and a half and with little use, decided to become stubborn or downright inoperative. I'm guessing perhaps it has something to do with being made out of wood, which isn't as stable environmentally as plastic is. In any event, these have been shitcanned and replaced by Blue Points. I've just got one Bullfrog remaining in service, and when this one fails--as I suppose it soon will--I'll be rid of them (I think I've still got a half-dozen unopened somewhere under the layout).

The laundry list of "to-dos" on the layout before setting a running night is down to a precious few, and I'm well ahead of the late-June deadline I set myself.

I’ve modified the prototype track arrangement at Gurley somewhat to fit available space while keeping the rural feel of the place. A truly faithful rendition would place the silo and station building along the front edge of the layout. I’d mocked up the scene with the silo in front, and given the 15” height between layout levels, felt that a silo of nearly that height would visually break the scene in half. Instead, I moved the silo to the rear. I also moved the station building to along the backdrop for two reasons: in most cases, I find it more interesting to look at the platform side of a train station than I do its backside; and its narrow depth (scale 15 feet) made it a better fit along the backdrop than the load bank and stock race. At Gurley, at least, moving these to the front of the layout provides more modeling, detailing and photographic opportunities than it does jammed in against the backdrop. The scenery will be very North-West: flat, wide expanses of farmlands and golden grasses between the Right of Way fences; the “hole in the wall” leading to Moree will be obscured somewhat by a cluster of trees bounded with a bitumen level crossing. 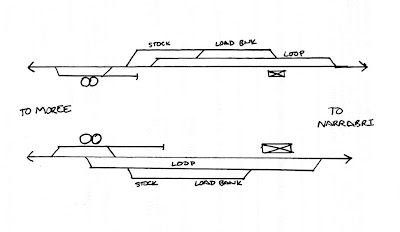 CAPTION: Sketch of track arrangement at Gurley. The prototype is at the top, my version below.

I’ve yet to sculpt the ceiling tile scenery/roadbed base at Gurley, but this past weekend completed the track work, wiring, and installation of Blue Point controls. I’ve included a short video testing the concept, depicting a 44 Class-powered wheat train crossing a 620/720 rail motor set at Gurley. Painting track, adding ballast, and more scenery work is next—not to mention adding the load bank, building the grain silos and construction the station building-- but in its present form, Gurley is ready for operations!

The First Time. . . and The Last Time

The first chance to really operate a large model railway is an exciting moment. All the anticipation built up from planning to construction to testing and acquiring the equipment finally comes to a head.

The last time to operate a model railway before its dismantling is more a time of reflecting on all that came before it. . .the good times shared with friends operating it, and taking stock of what the ‘next’ layout will be like—how to correct the deficiencies of the prior layout, maybe, and how to avoid similar mistakes the next go-round. And imagining how to make the next layout that much better.

These two experiences—the first time and the last time—were rolled into one the other afternoon when a few of us gathered at Lance Lassen’s house for the first and last operating session of his Ardglen Bank model railway.

Lance and his wife have been planning to downsize to a smaller home (an on-going process, given the lethargic US housing and mortgage market), and that means his good-sized layout based on the Ardglen grade in NSW will be coming down. Unfortunately, it’ll be coming down before it really got a chance to come into its own. Those who follow Lance’s blog will note it’s been curiously quiet for the past X months, time spent working on fixing up the house to put it on the market instead of working on the layout.

The layout would probably have come down without a chance to fully operate had I not shamed him into running it ‘just once.’ So for the better part of a weekend, Lance staged trains, cleaned track, and put together a scenario that would keep four operators busy running grain shuttles in and out of Werris Creek yard, banking coal and grain trains over the hill at Ardglen, and moving container trains of cotton out of the North-West. Lance models the early 2000’s, so the mix of motive power is certainly interesting: Silverton C’s and 442’s; GWA’s orange CLF/CLP and 22 class; Freight Corp/Pac National 80/81 class; CFCLA 44’s and bulldogs and EL’s; and a mix of LVRF 44 class in Red Terror, Blood & Custer and Heritage tuscan paint. There’s even a pair of Freight Australia X class as well as a lone interloper green A class bulldog that somehow strayed from the broad gauge and strapped on 4’ 8 ½” gauge trucks.( I won’t tell if you won’t.)

If planning and good intention would guarantee a smooth running session, Lance’s layout would have shined like a Supernova during its brief life. Unfortunately, model railroading is a complex undertaking, made even more daunting by a layout his size—probably 30’ X 25’ and triple-decked in places. Such an investment in time, space and money requires vigilance and maintenance to keep it in running order, and unfortunately the gremlins were out in force. We found out the hard way when reversing some points that not every turnout had the necessary electrical gaps cut in them. Scenery in places intruded where it shouldn’t, inhibiting points from fully throwing. Random nail heads were discovered in rather jarring fashion to be protruding above rail level. But the biggest bugaboos were related to wireless throttles: while the layout ran flawlessly while Lance staged the trains with a single throttle the night before, his CVP “Easy DCC” was unable to handle four wireless throttles sending signals through stud walls. Consisted locomotives unconsisted themselves. And signals to and from locomotives were slow in processing, creating the uneasy situation of trains not stopping when they needed to. At frustrating times like these, it’s always good to mock the old slogan of Model Railroader magazine: “Model Railroading Is Fun.”

Lance was understandably upset when a gathering meant to celebrate a newly operating layout became largely a trouble-shooting session. But we reminded him that no layout operates flawlessly without many uncomfortable shake-down sessions first. It’s easy to operate your railway alone with a single throttle at three in the morning; quite another thing to have a roomful of guests all running trains. The session wasn’t a total washout: we found that with three throttles, the layout still operated quite well, so we were able to bring a few big trains up the hill out of Willow Tree, a pair of 80 Class Alcos pushing on the rear. For a moment, it was possible to see the potential this layout had, if only it would have survived a few more years.

While it wasn’t the operating session Lance had imagined it would be, well. . .few sessions really live up to our expectations. Model railways aren’t a turnkey proposition. Smoothness in operation is only achieved by constant running, tweaking, and correcting. Eventually, you get to a point of reasonable reliability, But at best, model railroading is a social hobby, and despite the problems and frustrations, it was still a good afternoon spent with friends sharing a common passion for our model railways.

As you read this, Lance is probably tearing down this railway putting behind the frustrations of this first and last running session and no doubt dreaming of the next layout. Enjoy this video for what it is: a model railway as a work in progress. Don't mind the profanity and inane banter. It's what we yanks call "reality teevee."