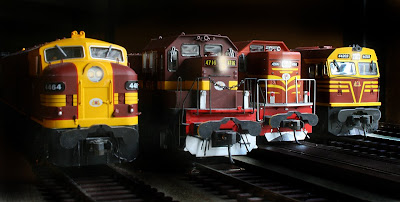 US modeling Guru J. Anthony Koester created the term "Layout Design Element" as a way to more readily incorporate prototype track plans into our model railways. Essentially, an LDE is a chunk of prototype track arrangement inserted almost "building block" style onto a railroad--the thought being that it is, afterall, the prototype railway that best knows how to design trackage for specific needs. These LDEs can then be rotated, compressed, expanded and edited somewhat to fit in available space while retaining the "flavor" of the prototype and, most importantly, their operational functions.

I'd guess most modelers who base their layouts on a specific prototype do this without giving it a second though--for me, being lazy, I figure why should I do all the hard work of designing trackage for a depot, station or terminal, when the prototype as already done it for me? Compromise must still be made, of course, and while my North-West layout is based on the prototype, I've taken several liberties in order to shrink it to fit in available space.

Here's a look at three stations on my layout: Wee-Waa, on the Narrabri West to Walgett branch; and Edgeroi and Gurley, between Narrabri and Moree. All are based on their prototype, but each have compromises, compressions and omissions in order to get them to fit--hopefully without affecting their operational interest much. Grain siding are long enough to hold five FWH-type hoppers (or six RU's, in the case of Wee Waa). Please excuse the extreme free-hand nature of the drawings.

While the prototype Edgeroi is on a long straight, the model version had to fit into a corner. A strict adoptation of the prototype plan would put the big grain silo complex along the front of the layout, effectively blocking everything behind it. I flipped the track plan 180 degrees to put the silo in the back, where it would form a natural backdrop. Space was at a premium, so I consolidated the stock and goods track, and, again, due to space, eliminated one crossover serving this track and the silo siding. The goods/stock track access is contained entirely between either end of the platform road (crossing loop).

On the layout, Wee Waa is the end of the branch, rather than just a station in the middle of one. Still, most of the trackage is faithfully presented, with the exception of the Namoi Cotton siding and one set of crossovers. I left the Perway siding in place; I plan to use this as a place to stable the 400 class motor car/DEB set during its layover in town. I suspect this is what this track was used for on the prototype as well after the loco depot and turntable were removed.
Thanks to Gavin Potter's great website for the basis for much of the prototype track plans.
Posted by B. Kooistra at 4:25 PM 1 comment: 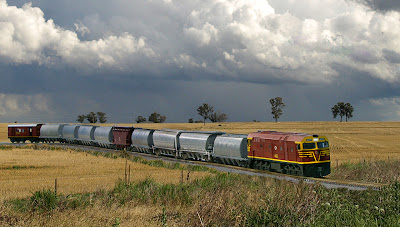 Man, that static grass looks great! Actually, a Photoshop effort combining a photo of the 442 on a grain train photographed on the new lower level with a landscape photo from the North-West gleaned from on-line. Not quite up to the Ray Pilgrim level, but getting closer. . .

I'd set the beginning of March as sort of a deadline to have the lower level benchwork and backdrop up, and last night, I finished painting the backdrop. It's been a month since I'd updated this blog; it's been a busy month on the railroad as I pushed to get as much done on it before my son's baseball season starts up.

I wanted to get the "unsexy" stuff out of the way: benchwork, backdrop, some of the roadbed. I was able to even put much of the lower-level mainline in place--albeit held down with track nails rather than anything permanent--as I explored track plan options.

There's no wiring on the tracks--I've run trains back and forth using a power pack and alligator clips. There's only the points at each end of the Edgeroi and Gurley loops, and I've got what seems like a kazillion #5 points to make to finish the yard at Narrabri West as well as the lower level points to access elevators and goods sidings. I did get the lower level lighting purchased and in place, and the benchwork, lighting valance, and roadbed for the branchline terminal at Wee Waa is in place and, in fact, connected with a section of track to the "rest" of the layout. the CVP Easy DCC is still in the box, awaiting installation.

But, now I don't feel so bad slacking off for the next couple of months while the kids play baseball, I get the taxes done, get a jump on yardwork (Spring has sprung: 85 degrees here yesterday!) and, oh, yeah, take a trip to Australia for a couple of weeks in April.

Now I've just got to dust the layout--cutting ceiling tiles creates a God-awful mess, even after wetting it down with a spray bottle--and put tools and other items away.

In the meantime, here's a couple of photos of the lower-level and a grain train: Jumbo 44203 moves along between Edgeroi and Gurley. I'll present both an "as photographed" view of the layout as it is now, with undulating, bobbing, wobbly temporary trackage, and after running through the Photoshop ringer (top of the entry). Oh yeah--that Jumbo is new to the railroad, too, as I took the feeding frenzy plunge and won one on e-bay; it'll be fun to detail and weather.

Next post will look at Edgeroi and Gurley, the prototype track arrangements and the compromises I made to fit them onto the layout while still retaining recognizable elements. 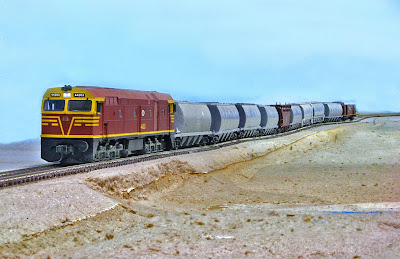 A bit more true to what the lower-level looks like at this point: 44203 pulls a train of grain empties out of the siding at Edgeroi. The cut-in chunk of fillwork under the locomotive will at some point become a small pile trestle.
Posted by B. Kooistra at 11:37 PM 8 comments: