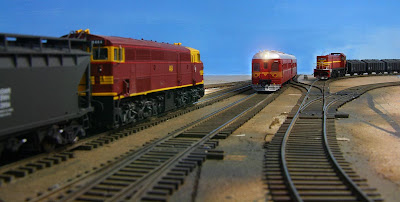 Points are finally in place at the down end of Narrabri West! Grain empty, on left, waits on the loop as the motor set from Moree arrives; a 49 class shunts the grain terminal with a rake of RU's. . .

Yep, it's been 2 1/2 months since I've last posted to this blog. Most of my hobby efforts since returning from Australia in late April have been devoted to writing about the trip, and more than a dozen such posts are up for your enjoyment on my non-modeling blog, Under The Weather.

You may have to dig back a couple of months for some of them, but they're there. I returned from Oz with a load a great photographs, wonderful memories, valued friendships and, oh, yeah, about 70 lbs. of books and model railroad stuff jammed into my suitcase.

What of? Tons of white-metal detail parts of the Uneek variety, courtesy of Joe Callapari at Casula. A few freight car kits. Another Train-O 47 class. A handful of passenger carriages. An epoxy Stephen Johnson Models kit of a 400 class motor car (Thanks a TON, Old John!). Smuggled out a couple bottles of NSWGR Indian Red paint (sweated that out going through customs!). And a very slick 620/720 diesel m.u. train imported from Eureka (not exactly "exact" for the North West out of Narrabri, but I hope no one calls me on that. . .and it'll fill in nicely until the DEB sets eventually show up!). And books. . .a few of which I'll highlight in coming weeks.

And so far, my wife hasn't found the credit card receipts. I may just be home free. . . 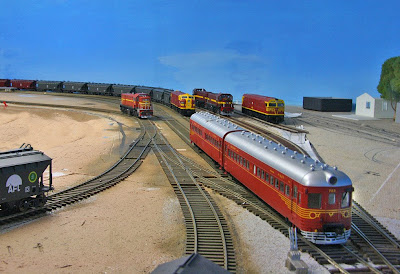 The view the other way. The fertilizer cars are on the oil siding; RU car barely visible in foreground is on the sub-terminal siding. The 620/720 set is on the mainline. The 49 class working as the yard shunter waits on the lead into the yard. In right background is location of the loco depot, for now served with just a single road. On the far right will be the eventual home of a turntable. Water tank, chargeman's office, showers, etc., will be along the background behind the loco depot.

Otherwise, having put all that stuff away, it's actually been good to get back working on the railroad. I had nearly a dozen points to construct in order to build the "down" end of Narrabri West's terminal, and those are now thankfully in place and, even more thankfully, fully wired.
With the exception of a few points that need custom-building in place for the loco depot, and the "Wee Waa" end of the branch, the whole upper level is at least functional enough to run trains over. Not functional enough to operate upon, though, and that's the final part of the puzzle.

You may recall my agonizing about what method to use to best throw my points. The options were the electronic (Tortoise motors), the above-board manual throw (Caboose Industries ground throws, or equivalent), or below-board manual throw (a variety of options). I've decided to go with the below-board manual throws, for a variety of reasons: I don't really relish adding yet another electrical circuit to the layout by installing nearly 50 Tortoises at $13/each; and the Caboose Industries throws, while cheap and easy to use, are unsightly. Nothing spoils the illusion faster than a big black plastic blob next to the tracks.

I've got options, too with the below-board manual throws, to wit: 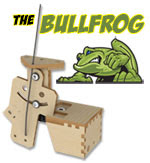 I haven't priced out all the options, but since i've got a ton of these things to install, I don't know if I'll go the "cheap but time-consuming" do-it-yourself method. And depending upon which components you use of the two commercial offerings for rodding, clamps, etc., they can damn well end up costing you as much as a Tortoise. I'm going away for a week of vacation in early August; when I get back, I'll have a few of the Bull Frog and Blue Point mechanisms on hand to install and make a decision on which way to go.

I'm sure I'm making this decision far harder than I need to. I'm usually the last person in the world to suffer from "analysis paralysis."
Posted by B. Kooistra at 6:10 PM 4 comments: