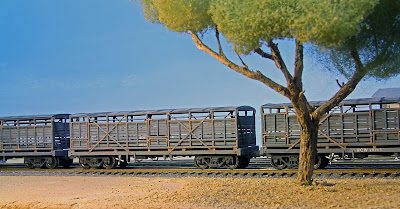 It was just coincidence that Trainorama announced the imminent arrival of a ready-to-run model of the NSWGR 1971-version BCW cattle wagon the same time I finally got around to building the Minimodels version of the 1959 wagons.

I ended up with seven of these kits through ebay and trades. They mostly sat unbuilt in the "to-do" box, their spot on the workbench delayed until such time that I decided to scratchbuild a new underframe for the cars. Thankfully, a resin casting from IDR became available, making it much easier to correctly model the low slung appearance of these wagons.

I'm guessing I'll need 12-15 BCW's for Narrabri North. The working timetable for the main north shows a Monday-Saturday Stock & Goods train from Moree, stopping each evening but Tuesday to pick up cars from Narrabri's saleyards for movement to market in Sydney. The branchline trains from Pokatatroo and Walgett are also scheduled to connect with these high-priority trains, so in the operating scheme of things it's important to have enough rolling stock to protect these assignments.


I followed much of Stephen Ottaway's article on modifying the Minimodels BCW that appeared in issue 9 of Australian Journal of Railway Modelling, with a few important short-cuts--Stephen's models are truly outstanding, but I had seven of these to build. The first major shortcut was the use of the IDR underframe. Stephen also used his skill in working with brass to fabricate outside braces and turnbuckles for the carbody using brass strip and brass wire. I instead used styrene in lieu of brass. Thirdly, Stephen used thin strips of copier paper glued and lightly sanded atop a new styrene roof to simulate aged Malthoid (tarpaper) roofing; I simulated this with paint instead. 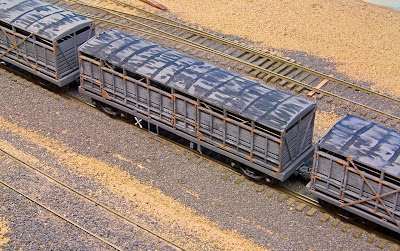 The IDR underframes were a Godsend, but not without a couple of caveats. Apparently, these were intended to use with a pair of Casula CW carbodies combined to create the taller 1974 version of the BCW. The Minimodels carbodies of the 1959 cars are approximately 6" too wide. One could deal with this two ways: narrow the ends of Minimodels cars accordingly, or laminate thin styrene strips to the solebars of the IDR casting, adding "U" channel supports for the carbody to rest on. I did both, and visually, you can't really tell the difference.

Above the solebars, very little of these cars is metal, the wood weathering in the sun a lighter shade than the original gunmetal grey. I mixed a little Floquil "Weathered Black" in with Floquil "Primer" to simulate the faded paint, going back later with mostly primer paint "stippled" onto the carsides for further depth. The metal braces were dry-brushed with a rusty color (in this case, Tamiya XF-52 "Flat Earth"). The Malthoid on the roof was simulated with Polly-S "Engine Black", which looks fine when toned down with dullcoat.

So, with seven 1959 BCW, I'm now waiting for one or two four-packs of the 1971 BCW's from Train-O. I'd like to add a few kitbashed 1974 cars in PTC blue, also, built up from still more IDR underframes and Casula CW's.

I'm just about ready for train #694, the up stock train from Moree, to make its pick-up at Narrabri!

Purchased an AR Kits MLV kit to join the already-assembled IDR version and the still-under-construction Minimodels aluminum MLV (another Minimodels offering requiring a modified or replacement underframe!). It only got a little more detailing than the basic kit: lamp brackets, side hand-railings, and a bit more underframe brake detailing. But it builds into a nice-looking kit despite its age and will look right at home on the head-end of the North-West Mail.
Posted by B. Kooistra at 6:35 PM

Blair
I think I will have to invest in a few Minimodels BCWs they come up nice with the corrected underframes.
I wasn't aware that IDR made these underframes and they don't appear on the IDR blog or the Hobbyland site so maybe he no longer makes them, any ideas?
I also note that the TRC underframes he sold no longer appear also.

Ray,
I don't know if the underframes are a generally stocked item or not; I think I might have gotten lucky and approached Ian at a time when he might have poured a few extra ones. Given the popularity of the Minimodels car, and the upcoming TrainO release of a companion wagon, I think he'd do well with the casting. I do feel fortunate to have these, as I missed out on the OSF container flats!

The last time I spoke to Ian he has a reasonable list of "to do" items, & given the quality of his work its always worth a look on his site, or talk with him.

I mentioned to him some time ago about doing new underframes for the old MRC, TRC vans & indicated he would do them.

With the news in the latest AMRM regarding the BCW from Eureka indicating the converted BSV type from the 70's it still leaves a hole for the 1959 version especially in an RTR version.

I find it understandable that the make use of what parts they can in other models, thus the BSV/BCW conversion wagon.