It's a Small World (after all)! 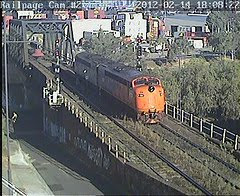 Direct from Melbourne to a computer near you: Bunbury St. Rail Cam


The clothes are sorted, the reservations have been made, the travel documents all printed out and safely stored, and the last shift at work for the next 20-some days have been completed. All that's left is to finish packing, weigh the bag (must no exceed the weight limit!) and head to the airport tomorrow night for the beginning of my second trip to Australia.

My travelmate Lance Lassen--with whom I partnered with on my first visit in 2009--and I really began preparation for this trip about a year ago. But planning has been pretty low key until the couple of months, when we got serious about learning a bit more about railroading in Victoria and South Australia, two states I've not visited before but which will figure heavily in this go-round.

It's amazing when we think about it, but we're leaving with a list of nearly 30 contacts--fellow modelers, railroaders, and railfans. All of us share a passion for Australian railways, and while many of them know each other, none of them know everyone else. Lance and I have become the "Kevin Bacon" in the equation, a la "Six Degrees of Kevin Bacon" (Google it.).

We'll be gone for three full weeks--and they will be three FULL weeks, with no slack days in there to lie on a beach or look at Koala bears. As I like to say: I'll sleep on the plane. The fact that two Americans can put together three weeks of near-constant activity chasing trains, photographing trains, driving to see more trains, visiting hobby shops, visiting layout, visiting friends, and, oh yes, eating quite a bit of great Aussie Bar-B-Que--well, it's something that pretty much would have been impossible 15 years ago. And for this, we have the wonder of the Internet to thank.

Now, this isn't meant as a slam against Australia, but when you compare rail traffic in the US to that down under, from a sheer volume standpoint, the United States rules, hands down. We've got the population, of course, but we also have a higher percentage of the population living away from the coast. Consequently, a good deal of the rail traffic in the US which isn't grain or coal is merchandise moving to consumers far inland. That isn't, by and large, the case in Australia. Which is a way of saying that if you want to be busy watching trains in Australia, you're going to have to know where to go and when to be there--that is especially true in Victoria, where the policies of state government in the past have really decimated the rail freight franchise there. In the United States, go to a mainline, and chances are you'll see a train before too long.

Here's where the internet comes in handy: for the past couple months, Lance and I have been able to innundate ourselves with information on Australian freight railroading. On line, one can see track diagrams, signal diagrams, operating rules, train make up rules, and freight schedules (all of that stuff is closely controlled by railroads in the US--security and terrorism, ya know!). The rail enthusiast gravevine is fully alive and well: very few train movements go by unreported, and besides tabular recaps of trains on internet news groups and websites such as Gheringap Loop, for railfans in Victoria (where traffic really is sparse), there's popular real-time web cams at the busy Bunbury St. tunnel in Victoria and on the mainline west of Melbourne in the little town of Stawell. None of this stuff would've been available to see a decade ago from the comfort of an old used office chair in Fort Worth!

Through the world-wide interwebs, we've been able to ask questions, make acquaintances, and build friendships across the miles. We've got friends as well as near-strangers offering us accommodations on our journey--something I don't think we'd see from fellow Americans.

Well, it's all a lot to ruminate about, and it's being done while I should be packing. But even before we've left the ground, I'm sure Lance would agree with me that from an information and personal communication standpoint, this trip is already a success.

One sleep to go. Sydney (and Melbourne, and Adelaide, and for that matter Tocumwal, Tailem Bend and Dubbo) here we come!
Posted by B. Kooistra at 8:13 PM

This site and its content is so nice, i appreciate you from my heart & sole, nice job.
freight to Australia

Blair,
It sounds great! I hope you have a great time and wish you safe travels.
James

This link may help if you don't already have it.

Thanks, all,and Jon, yes, helpful site, at least until the new radio system comes on line and it goes dark! But I do wonder why ARTC only has this available for NSW instead of their whole network!

I think they inherited the system when they took control of NSW and have never extended it. I remember a similar system was available at some signal boxes before the takeover but can't remember for sure. Anyway I hope you guys have a great trip again be sure to stop by IMRA if you get a chance to come by Wollongong I am sure the boys would be able to organize something for you guys.

Good Morning, enjoy your trip over here. Coming to Perth , Western Australia by any chance ? None the less, have a great time and enjoy the sites ! Cheers.

you need to be way under the baggage limit coming in to allow for purchases ...etc.

I have been reading a lot of stuff about it. but it is different presented, i loved to read this. keep it up.Vans for Sale in Australia