. . .the old WWV layout has now come down, been consigned to memory, some of the track salvaged, much of the dimensional lumber disassembled and stacked for later use, the plywood layout top unscrewed, track removed, and stashed out of the way for later use. 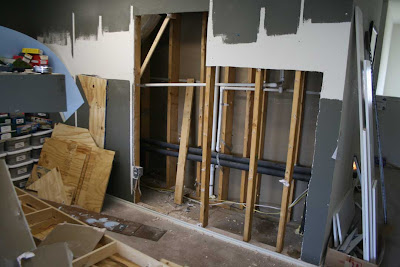 First thing we'll need to do is make a bigger hole for that 26" radius spiral to fit into. That's 52" across for the track, plus another 6" or so for benchwork, making it nearly five feet in diameter. THAT will quickly chew up available space in a room, but luckily, the builders of our house for some reason left a 30" deep space for utilities--ductwork, drip lines from the overhead HVAC, and water pipes--between the "great room" and upstairs bathroom. We'd be foolish not to exploit it! So, armed with a hammer, a drywall saw and a jigsaw, let's open that sucker up!

Inside, the space is nearly clear, with the exception of two drain pipes from the HVAC, which were easy to reroute to provide necessary clearance for the helix. That might look like a big-ass hole in the wall. . .but, as some famous model railroader--Lin Wescott? John Allen? Donovan in Dallas?--once opined, "Shit! It's only drywall!" Indeed! 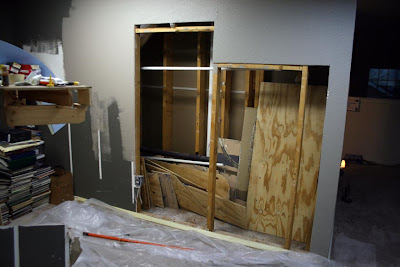 With the old layout removed and the hole opened up in the wall, I decided to pretty up the room a bit by painting over the old drab dark green/grey paint with something a bit more contemporary. . .most of which would be covered up by the new layout, anyway. But, two gallons of eggshell latex later, the room was looking pretty good. 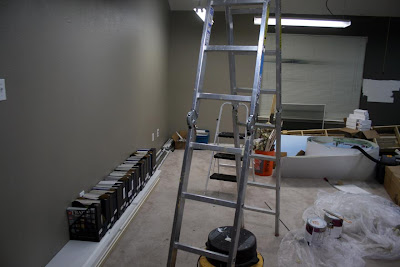 The plan for construction is this: build the upper level first; get the wall brackets and benchwork in place, lay in the backdrop and paint it, put down the roadbed and some track. That should keep me entertained most of the summer. Maybe by fall we can interest a posse in constructing the spiral to the lower level. And then by spring of next year, maybe we'll get the lower level in place. At some point will come the staging tracks in the adjacent bedroom, the lighting valance above the upper level, and finishing out the storage area below the lower level benchwork to look presentable. 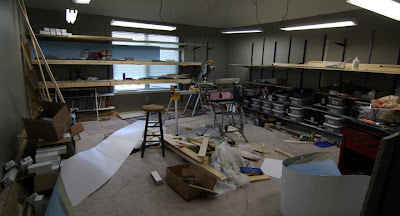 And with the painting completed, construction begins--oy! A mess quickly overwhelms the worksite!

Okay, the hole is cut into the wall, holes from the old layout patched up and the room has been repainted. Heavy equipment has been moved into place (a kick-ass chop saw courtesy Matt Sugerman), and we've put the wall bracket hangers in place and mocked up a couple of "pretend" levels of the layout to get an idea of potential heights to place the two levels. At this point, it's a God-Awful mess in there. . .but we'll get around to that in a bit.