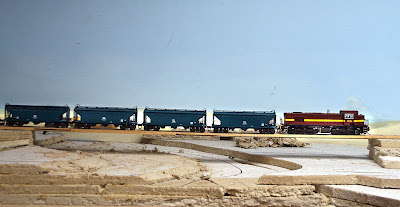 Crossing the Namoi River
Between the stations of Narrabri and Narrabri West on my model railway, the Namoi River must be bridged. On the prototype NSWGR, two lengthy pile trestles (similar to the one between Narrabri and Wee Wa) cross the river and its flood plain between Narrabri Jct. and Narrabri; the river helps define the area, so a model of the bridge--shortened considerably--is a signature element of the railway in Narrabri. Such a river crossing and bridge would be a first for me as a modeler, so building such a crossing on an otherwise nearly-flat upper deck was a bit intimidating to me. The bridge isn't that tall--less than 20' or so--and will be approximately 200 scale feet long. 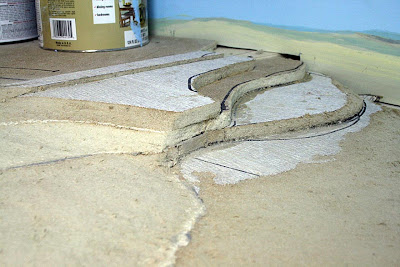 To model the sloping river bed and the approaches of the railway to the bridge, I'm following methods used by U.S. modeler Jim Six and using stacked layers of ceiling tile, shaped and sanded to a correct profile. The construction of the east bank of the river so far has been extremely dusty--when I complete the west side, I'll wet down the ceiling tile beforehand with soapy water from a spray bottle. But so far I'm impressed by how well ceiling tile contours. An alternative would be 2" thick extruded insulation foam. I mocked up the scene, once again, and posed my trusty 47 Class and a few FWH atop a thin board filling in for the not-yet-completed pile trestle. 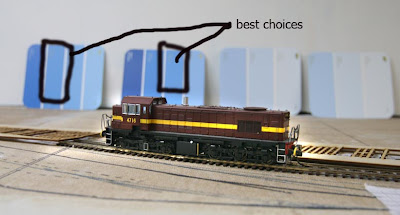 A deeper blue sky
The styrene sheet backdrop on the layout is re-cycled from the previous Walla Walla Valley. I never was happy with the shade of blue used on it however; while it looked great to the eye, it photographed nearly white. Since I had to repaint portions of the backdrop anyway following puttying and sanding of the new seams, I decided a slightly darker shade was in order. I photographed my 47 Class locomotive under the flourescent light with paint samples from the local home-improvement store in the background. From the photo, I chose a shade--Behr "Windjammer," from Home Depot-- that looked slightly darker than a near-horizon shade of blue, then blended that darker blue with the lighter blue paint I already had on hand. I'm pleased with the result. At some point, clouds will be added as well as landforms near the horizon. 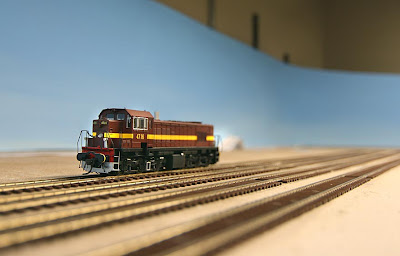 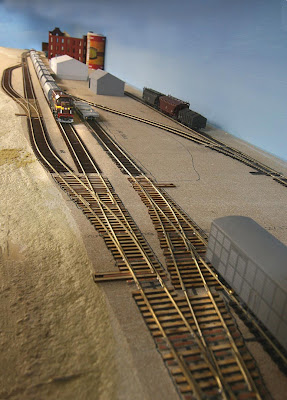 Do-it-yourself Points
If I had my druthers, I'd purchase all my trackage ready-to-run. Thankfully, MicroEngineering offers great-looking Code 70 flex track. But when it comes to turnouts (points), I have to balance availability, esthetics of the product, and price in order to build a railway with nearly 50 turnouts. With the exception of a few crossing loop points that will be #8 frog geometry, nearly all the rest of the points on this layout will be a #5. And since I've settled on Code 70 rail for a more prototypic look than the usual Code 83 profile, my choices of ready-to-run are pretty limited. Actually, quite limited. As in, none. So that leaves me the option of buckling under and using Code 83, changing to a longer frog turnout, such as a #6, or sticking to my guns and going with the Code 70 #5 option--even if it means scratch-building the turnouts. Thankfully, I'll have a little help in the process thanks to the folks at Fast Tracks, who offer a nifty aluminum jig to hold components in gauge while you assemble a turnout using MicroEngineering rail, PC board copper-clad ties, and laser-cut ties to finish the model. They also offer a nifty tool that holds rail in place for filing into precise points and frogs as well. The initial prices is high for a starter kit (which includes the jigs, the filing tools, some rail, solder, contact cement and PC and wooden ties enough to get you going), but I figure by the time I've completed the turnouts I need the cost will be down to around $12-14 per turnout. Since Peco Code 83 #5 turnouts are going for around $25 a piece these days, this makes economic sense. And the turnouts look pretty nice, are very smooth-operating, and feature a much-nicer looking continuous rail from frog to points. My first turnout built using the jig was perfectly acceptable, and took around 2 hours. Now I've completed nearly 10 of them, they're even more nicely assembled, and I'm down to around 1'15" per turnout of construction time.


Two last Mock Up photos. . .
It's heartening to get to this point where I've got some track down, I'm ready to go with wiring, and no too far from putting down ballast, ground cover and dirt. Here's a couple final views at Narrabri: 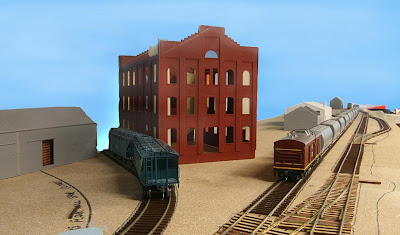 Going-away view as Guard Van passes the Keys Pty. Ltd. flour mill. On right distance is carriage shed spur; left distance is the station, and beyond that the goods shed.

Next: Locos and Rolling Stock--prototype and appropriate models. . . .
Posted by B. Kooistra at 10:41 PM

BEK
Love your work. You have chosen a classic area of rural NSW to model. Your era marks the "beginning of the end" for govt freight ops in NSW. A sad thing.
I started with the PTC of NSW in '79 on the stations and as a trainee engineman mid '80 (SRA of NSW). Worked goods and pass trains on the Illawarra line (Sydney to Nowra)till '06.
I fired for Col Hussey (one of your photos)at Pt Kembla Depot after he was appointed driver and still stay in touch occasionally. Spent many many hours on 48's, mostly in the dark, and some on 49's as they came off the west lines. Bit of a soft spot for branch line engines.
Look forward to following the progress of Narrabri West, just a bit envious, don't have a layout yet!