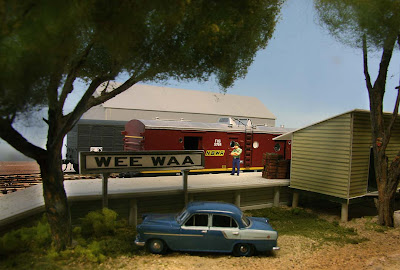 The guard working Branch Line Goods Train #695 awaits departure from Wee Waa sometime in the early 1970s. The station master's 1958 Holden FC is parked under the shade tree next to the station.

With one operating session under the belt, I guess it's time to do a bit on the scenery/structures front before the next one. So, to accelerate the process, i'm assembling a few L J Models cardstock models of NSWGR prototype structures, including an S008 silo, a G2/3 goods shed, and an A4 station.

The A4 is perfect, in fact, for two of the stations on my railroad, as these were built at Gurley (peaked roof version) and Wee Waa (narrow skillion version) on the prototype.

You can get as involved as you'd like with the LJ models. An old Australian Branchline Modeler magazine showed how individual boards could be scribed onto the cardstock walls and the models repainted, super detailed, etc. Or, you can be content with four walls and a roof. I'll probably go "halfway" for now on these. . .until I decide to max out the detail using styrene trimwork or not.

This afternoon, I put together the basic "box" for the Wee Waa station, and it looked so good at 25% done, I thought i'd get a loco and a guard's van and some scenery material scattered down on the baseboard and snap a piccie or two. And I'm amazed how good it all looks, even in this admittedly crude form. I'm sure I'll revisit this scene later when details and scenery are futher down the road, but for now it's definately motivated me to keep moving forward.

For now, here's two versions of Wee Waa, as you'd probably see it as you drove up to the station circa late 1960s. The guard bides his time on the station platform awaiting the departure to Walgett of Branch Line Goods train 695. The station master's well-maintained 1958 Holden FC sits in the shade, out of the harm of the sun but a prime target for roosting galah's, who are sure to shit all over the car by the end of the day. 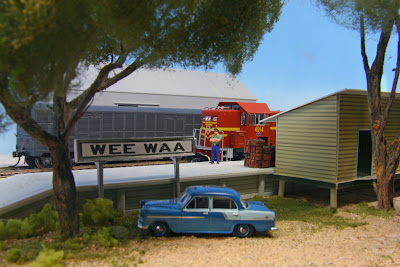 Great work there with that little scene. I can't think of anything much more Australian than having the old Holden parked in the shade of big old tree during one of our sweltering hot summer days in the north west.

As nice as it is having trains running, there's nothing quite like getting some scenery down to really bring it all to life.

As an aside, many years ago a mate of mine had a beautiful restored red and white FC Holden, which he always said stood for f'ing classic!

Keep up the great work.

Received your 'dispatch' the other day. Thanks for your comments and I don't believe any permanent damage has been done ;-) Nice pic to! Hope to able to do a little shunting in Tx one day!
GL

Blair,
I clicked on the two links between what Darren and Gary said and it looks like you have a pile of lonely heart asian ladies following your site!
Love to know what they said, have you got it translated yet?
Bob

Bob, You're a braver man than I to just click on those links. But, since it didn't bugger your computer up, I tried it as well. . . I must say, these young ladies must also have an interest in modeling NSW outline! More power to them and their girly parts!