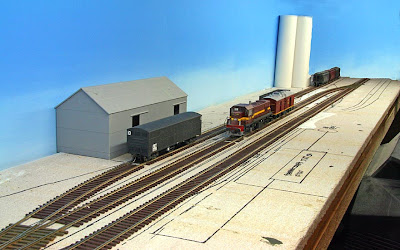 Most of the track is in at WeeWaa; that's a "stand in" Walthers metal building where the goods shed will eventually be placed; to the rear, the location of the S008 silos. In the foreground, the platform is marked out along with the narrow A4 station area.

Bloody'ell! It's been 2 1/2 months since I've posted on this blog. And despite appearances, I haven't dropped off the face of the earth, given up modeling, or joined a Monastery. I figured come Thanksgiving holiday, I'd shut down work on the layout til after the first of the year, and that's exactly what happened.

Before Christmas, I did manage to move a couch upstairs and install a 46" flat screen telly on the empty wall in the layout room. And to christen that, I had a dozen friends over to watch train photos. . .we had the usual Kodak Carousel projector for those "old school" photogs whose piccies are actual pieces of film, but it was the first time I'd hosted a photo night where digital images were the majority. And, they look GREAT on the new television--er, monitor. Whatever you want to call it.

Now that the calendar has turned, I'm back after it on the construction end, motivated somewhat by an announced "first" running night later this month. Gulp. Besides the work on the layout that's needed to get it operable for a group of friends, I've got the paperwork and car movement stuff to worry about as well.

So far, the attention to the layout has shifted to the guest/computer room and the WeeWaa portion of the layout. The length of the benchwork is only a little longer than 8' and around 15" in depth; while not exactly huge, it does provide a little space for a running track with loop and a siding for a goods shed/load bank and grain silo. There's a space for a stub siding in front (the remnants of the lead to a branchline loco depot?), which will not be used for livestock loading and a place for the rail motor to lay over between runs to Narrabri. I'm guessing the "branchline train" will be one of the most popular operating positions on running nights.

I got most of the trackwork in this weekend, with point controllers installed and the electricals soldered in. I've got a set of crossovers yet to build and the points for the ex-loco siding, but these will wait til I get PC board ties to complete the job.

Structures and the beginnings of scenic treatments are next on the agenda; I've decided permanent scratchbuilt styrene structures will have to wait for a bit, so i've ordered a few of the LJ models cardstock kits in the meantime. Pretty soon, Post willing, I'll be assembling a couple of the S008 silo kits as well as an A4 skillion station and G3 goods shed for WeeWaa. Platform faces and bumper stops are also ordered.

For now, I'd like to get WeeWaa somewhat complete before going much further on the lower level, where benchwork and backdrop are in place but roadbed and trackwork only temporarily set down. The benefits, right now, are quicker to realize for better operating sessions by having the branchline terminal in place to hold the interest of a crew shunting the little town.

A shoutout to the Argyle Eagle, Shane Murphy, for once again opening his layout to several of us to come and operate. Shane's one of the easiest-going cats you'd ever want to meet; he's also got a bit of a screw loose, not that it's a bad thing, and doesn't take the hobby too seriously. An operating session at his layout, which is something like 15 X 90" and double decked, is bound to, at somepoint, feature a freight train with a flatcar hauling King Kong around. Quirky, yep, but it certainly keeps things lively.

While he models mainly the Missouri Pacific/T&P and Missouri-Kansas-Texas railroads, he's not so anal retentive to not allow us visitors the chance to bring our own equipment. . .so for the past couple of years, running at Shane's often has an Aussie flavor courtesy yours truly and Lance Lassen. Two nights ago, we descended on Shane's with more Australian equipment. Lance brought 12 Auscision NSW grain hoppers and new Auscision A and B class bulldogs (in Freight Australia, Southern Short Haul, and CFCLA liveries) and I assembled a 26 car train of RU and BWH's behind a 49 Class and a 442 Jumbo. When I get a video file from a friend of the cross between these two trains, I'll post 'em up. One thing others noticed about the Australian equipment: it usually ran much smoother than the American equipment on the layout. Y'all should be proud!
Posted by B. Kooistra at 3:28 PM

Yes, welcome back Blair and I look forward to the video. I must try one myself one day but you can't use Photoshop to get rid of the walls above the backscene ;-(.

Did you ever sought out the gauge issues (mid 2009) your Class 47 was having going through your points? Just wondering as I have a couple 47's here and have the same issues going through either Fastrax or Peco code 83, yet wheels all in gauge. Baffling!

Glad to come across your blog, I thought he nearest Oz modeler was 12k away!
Simon, New York

I've found that the two 47's I have for some reason seem to be tight on gauge, which I've been able to take care of by re-gauging the wheelsets. However, it isn't a permanent fix, and every once in a while I recheck the gauge on them and--wouldn't you know it--they wander back out of gauge. i've got a small loco fleet, so it isn't too much of a problem.

Simon, tell me more about your Oz modeling? I think that's 5 now in the US!