Emerging from a cloud of (probably toxic) dust. 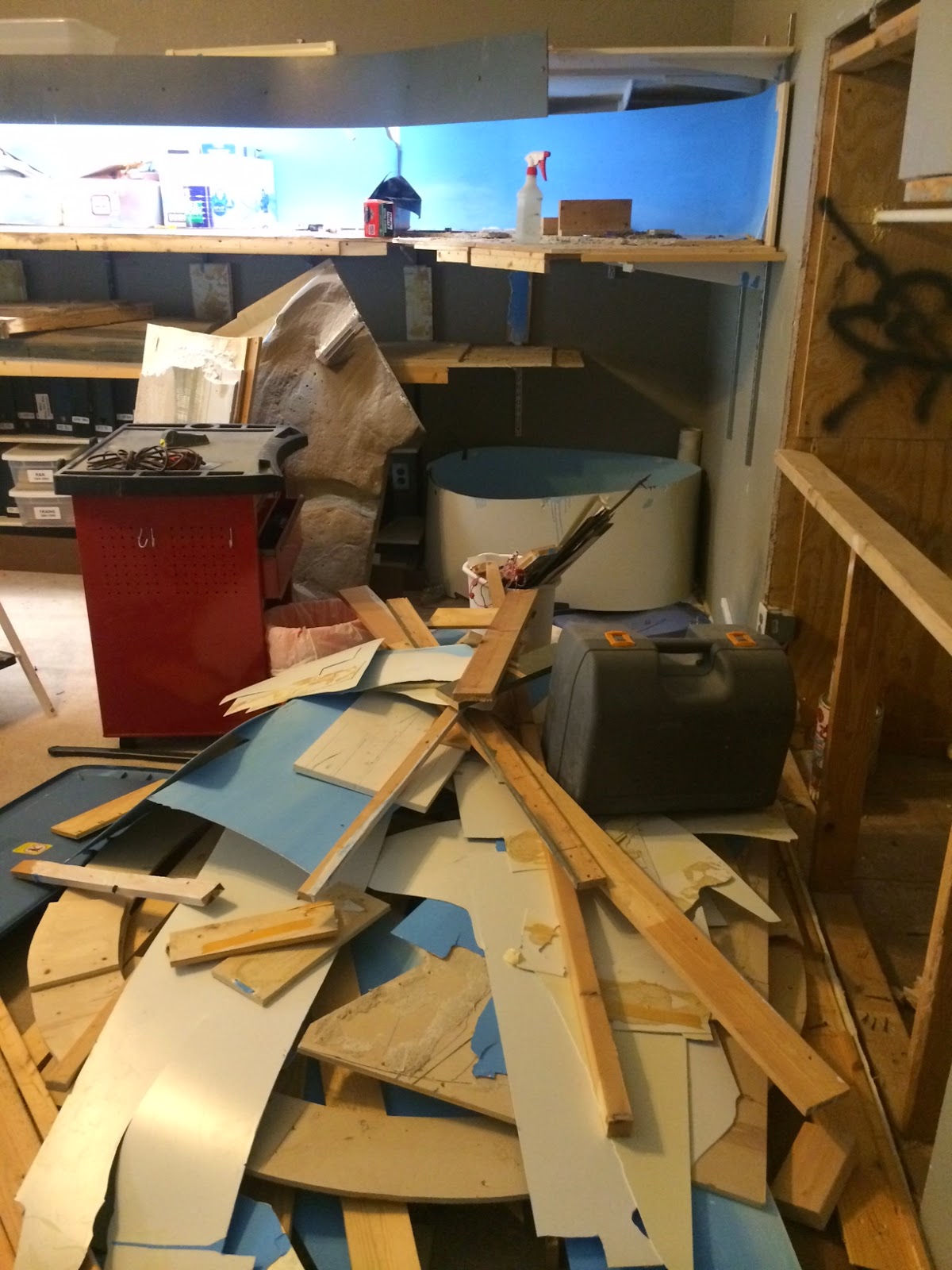 How I started the morning: destruction as a form of art. . .

Spent most of this weekend tearing down North of Narrabri. It's not really gone--somewhat careful demolition (you can never be too careful!) to recycle whatever assets of the old layout has allowed me to be "sustainable" (in the modern parlance) and not toss too much unwanted lumber out the upstairs window.

Seriously. After removing most of the lower deck, I was able to open the windows, letting the sunshine into the layout room for the first time in 5 or 6 years. My 10 year old son, Ian, exclaimed that he "didn't know there was a window there!".

It's tougher to tear down a model railroad than it is to build it. In my case at least, construction was problem-solving-as-you-go. And in the heat of wanting to make progress, construction proceeded not in the most logical, linear fashion. Meaning that lots of times, screws were driven in from the top side of the benchwork instead of below. Why is this important? When it comes time to tear that mother down, you'll discover that the screw heads you need access to are buried under the scenery. Something I mean to remember each time--but rarely do.

In the meantime, it's a godawful mess--as bad as it was the last time I tore down a layout, the Walla Walla Valley, back in 2008. Worst part is the dust from the pressed paper ceiling tiles used as sub-roadbed. It's like springtime in Lubbock in here. Everything is covered with a layer of white dust. I always ask myself why I insist on the ceiling tile--why not use pink foam? I guess with the foam I'd just be trading white dust for pink staticky dust.

The helix was generously donated to a UP switchman in town who could use it for his layout he hopes to build in the future. Lower level lighting and a chunk of excess NSWGR rolling stock ended up with my mate Lance Lassen. About half of the rest of my Aussie stock was offered up via Facebook, and all of it so far has either been sold off or spoken for. I'm guessing my asking prices weren't e-bay astronomical. I hope the new recipients of the models are happy with their purchases.

So this begs the question I get a lot now: So, are you done with modeling Australia? Are you going to do another version of Walla Walla Valley? I've been coy in the past, repeating the "conceptually linked" line one layout designer used in Model Railroad Planning to justify a two-level layout, with two different railroads, not physically linked. "Conceptually Linked?" Well, in addition to the Walla Walla in Washington State, USA, there's a Walla Walla in New South Wales. . . served at one time by the NSWGR. Could THIS be my next layout? 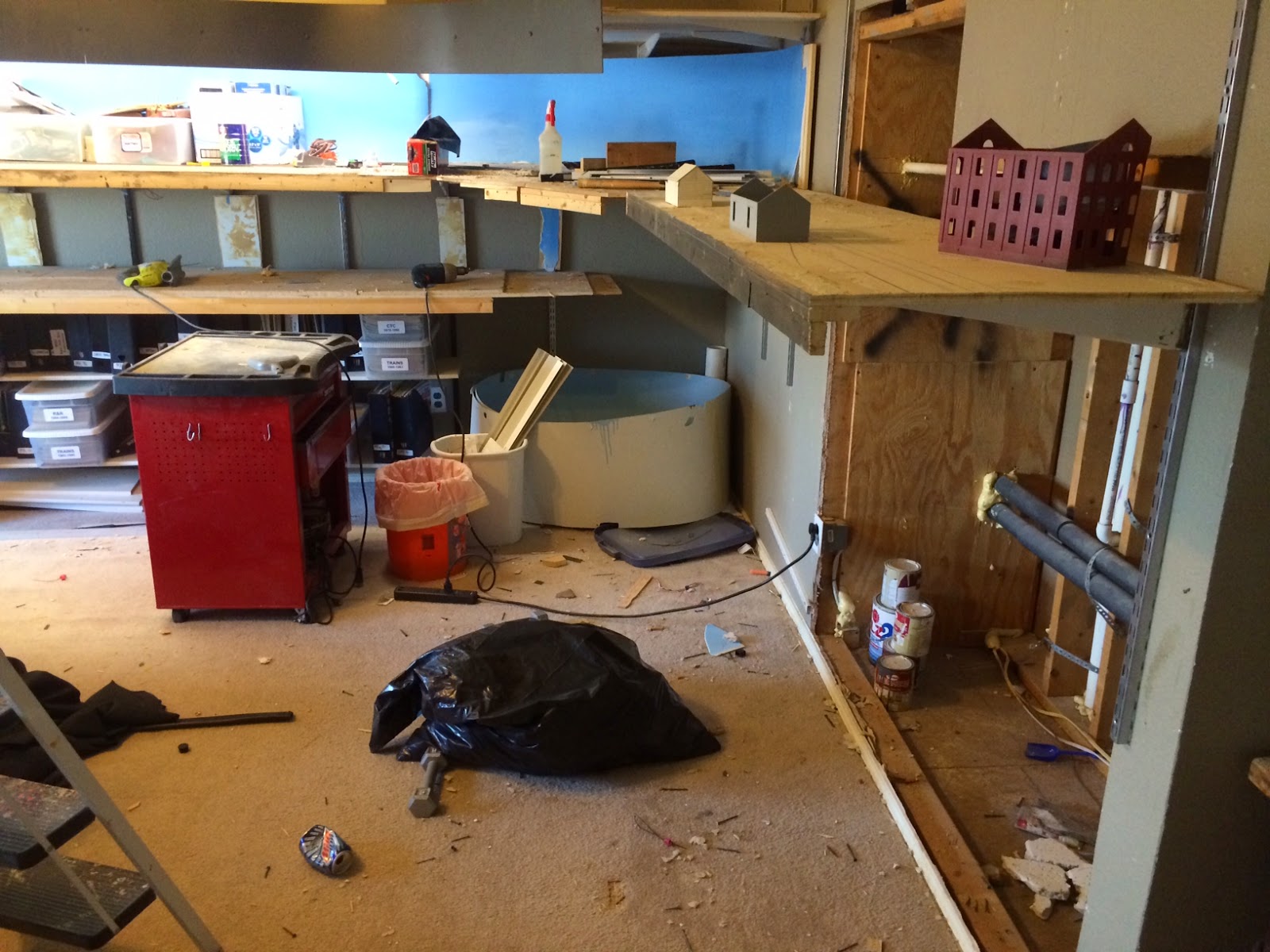 Did that last week with my Iain Rice diorama test track and associated drawers and shelves of support items. All went to the landfill in KS Thursday. This destruction was lots easier than the previous layout, as I deliberately followed Rices' techniques to make it simple. And it was. But I can identify with your trouble taking down stuff as the other than layout stuff I had installed was a real bear! But I was happy with The Rice Approach and will be ready to do it for real in North Carolina next year.

Dang Blair,
Just lost 50% of the only American crew I know that models NSW railways.
No pressure now Lance but all of us down under will be looking forward to your next update for Tocumwal?
Enjoyed you blogs Blair and thanks for flying the Aussie flag "Up over"