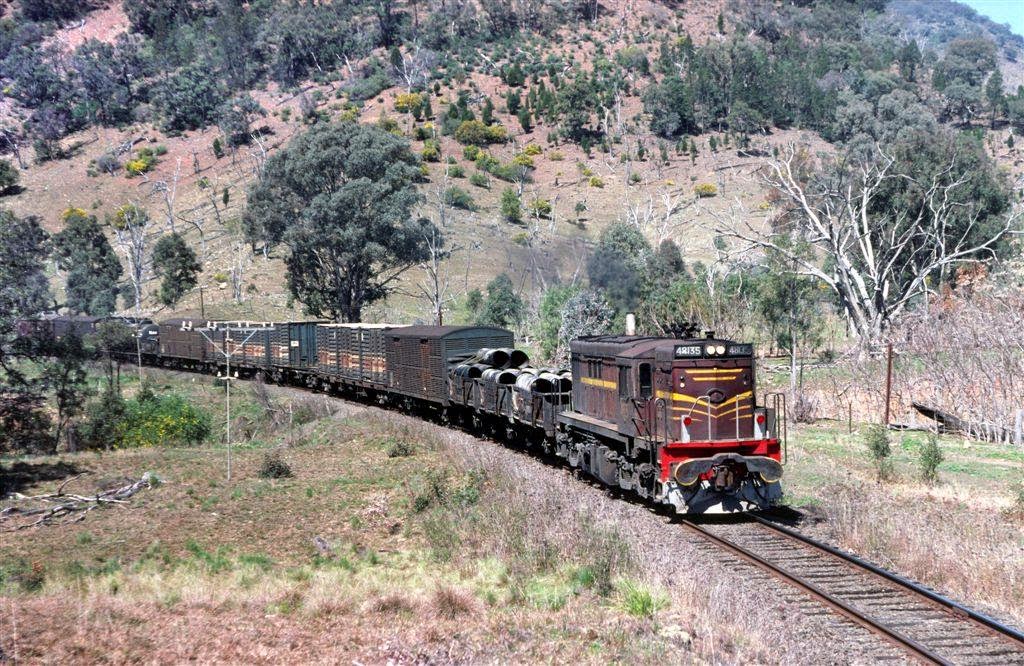 A classic 1980 view by Chris Anderson of a Gwabegar-bound goods train between Ryalstone and Mudgee, with a 48 Class up front followed by an assortment of S-wagons, a bogie goods van, nad several flat wagons loaded with RACE containers. RACE was  a cooperative effort by several Australian state rail systems to pool containers for domestic less-than-carload shipments of traffic (think: United Parcel Service). These cars would be set out at Mudgee.

That's what I'll call it for now--the new New South Wales branchline terminal layout I've decided to plow ahead with.

I like a little bawdiness in my Australian place names. South Coast Rail has a whole epistle given to unusual Australian place names. (Burrumbuttock--there's a name to fuel the imagination. How about Coonabarabran? I'm mostly intrigued on that one given the Wikipedia entry on how it got its name:
"It seems no one really knows the source and meaning of the word Coonabarabran. It may derive from a person's name or from the Kamilaroi language word 'gunbaraaybaa' meaning 'excrement', translated earlier as meaning, 'peculiar odour', this possibly is a bowdlerisation. Another meaning is derived from an Aboriginal word for 'inquisitive person'."  Quite a divergent pair of choices. I'm guessing the former is the real story, and the Aboriginals just told the settlers the latter to appease them. But I digress.) Walla Walla doesn't even make the list!

So, there will be no double-decked dual Walla Walla railway this time. I'm sticking to New South Wales, and proto-freelancing a rural branchline terminal. I'd been kicking this one around for quite awhile after seeing railway models in Australia based on this concept. Bowen Creek quite comes to mind. And most recently, Burrowa. I like the idea of a sun-baked, drought-stricken nowhere little town in central New South Wales. Call it late 1970s, when rural traffic was in decline. The franchise was on shaky legs. The inspectors weren't as regular out on the far reaches of the territory, so the paint is peeling, the weeds and high grasses are taking over the roadbed, and without steam, those Sellars turntables are starting to get a little balky in their operation.

I scaled back ambitions from Narrabri this time. I'm hoping that by concentrating on the visual and operating experience of such a branchline terminal, I can accomplish my goals. I'm still striving for operations, but realistically I know I'm somewhat of a lone wolf (with a few other wolfs time to time for company) and need to have a railroad that is fun to build and scenic, doesn't require an overwhelming amount of rolling stock or locomotives, and can be operated by two or three--or even one.

Where is Buggardine? The name is influenced by Baradine, on the Gwabegar line. I love the Warrambungles, and the idea that grain trains came off the plains and down the canyons of this rugged piece of New South Wales. I didn't want to be constrained by an actual prototype, so le's forget for now that Gwabegar didn't exist, and Buggardine did. 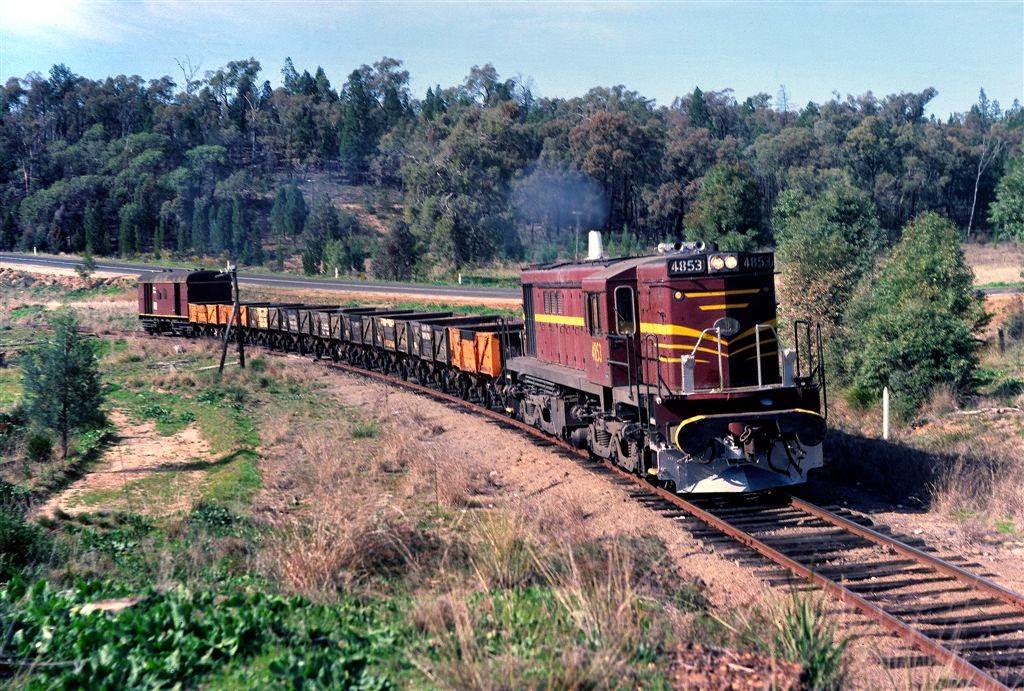 Another 1980 Chris Anderson view, as the 4853, an earlier series 48 class, wheels 10 empty S-wagons and a GHG guard van along the Gwabegar branch near Yearinan with a Baradine-bound goods train. Light rail and minimal ballast!


It's a small town, maybe the council seat of the shire. To the south and west are the jagged Warrambungles. To the north and east, the flat plains of the wheat belt. A thrice-weekly goods train calls here, the timetable bolstered by conditional extra schedules for wheat, occasionally livestock movements, and depending upon contracts, containerized cotton extras (the cotton industry, as it has in the nearby Namoi region, has recently taken root in the area, and containers are loaded on a newly-paved apron adjacent to the old flour siding).

The infrastructure is typical of rural NSW locations: station, loading bank, light crane, goods shed. A silo. Livestock pens. There's a weed-grown track leading to a 60' turntable and unused coal stage, and near there, a decaying bunk house for crews that no longer stay in town. A stationmaster's home, water tank and ganger's shed complete the terminus scene; two parallel sidings run into town, serving two oil distributors and a flour mill, and the aforementioned new loading area for cotton containers.

Just outside of town, on a separate dead-end siding with a run-around track, partially obscured by trees and rising hills, is a new, modern wheat board high-throughput grain elevator complex, visited in season my tandem branch line locomotives and the new WHX/WTY wheat wagons.

Completing the scene is a panorama leaving town, dropping down into the Warrambungles, a peaceful scene across the paddocks where sheep and cattle graze.

It seems doable, and given the right amount of "restraint," I have the room to keep the layout uncrowded and believable. 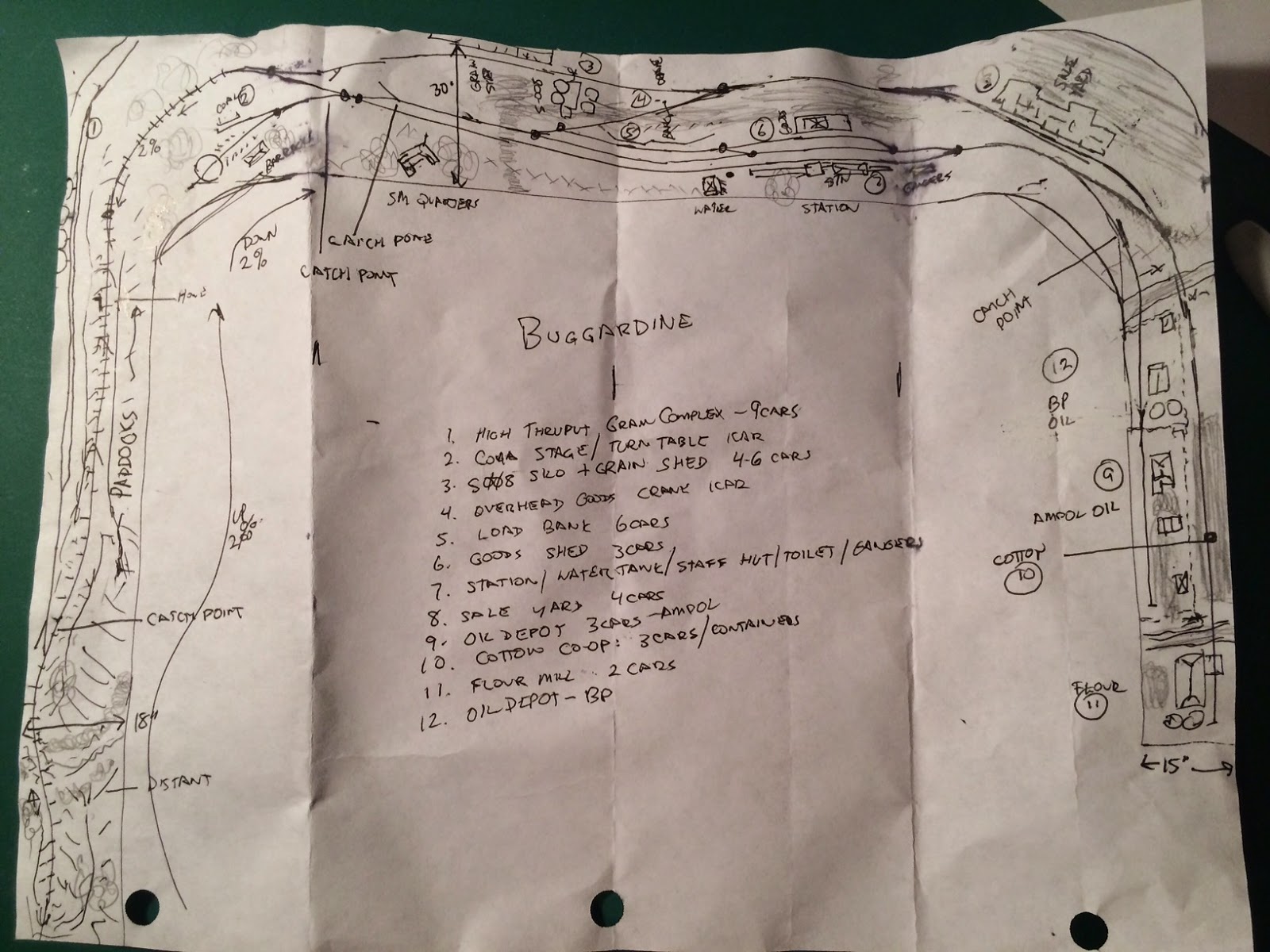 Cheers. Now you're talkin. I think you'll find it IS a hobby again.

Great to see your enthusiasm returning and a nice manageable project on the horizon.

The best thing I ever did was built a small 4x8ft layout for the kids, as it keeps me sane also, as the 'big' layout (30x11ft) gives me headaches. I'm planning on a rebuilt maybe next year (or 2016) to model the Southern Highlands.

I look forward to Buggardine updates!!

That was close Blair.....thought we'd lost you !
Have actually spent a week at Baradine and explored the perway, not much left now. Walked all the trackage at Gwabegar and managed to fit all the features, including the wye, into my version - Wobygar !
Look forward to following.

So you were just pulling our leg about leaving the hobby?
You have picked a nice area, although the recent bushfires through there could make unusual scenery modelling.
Two blog updates in two days!! Looking forward to tomorrows update.

I knew you couldn't do it!

At least you now know that the Trainorama 48s will be here in late November, hopefully....

I think I can see a 50 class trundling along through the grass sometime in the future.. ;-)

Gary Laker, space is essentially 16' X 19'--thinking the 19' should give me a good amount of room to not compress the terminal too much.I'm sure we'll have much to discuss on this line--or more likely, me asking you about it--in the future.

Appreciating the humour in the name, would Bugardine be more correct in terms of a 'local' spelling style?

From my memory of Baradine the amount of flies around the stinkin place would bring out a lot of expicatives thus Bugger Baradine & its flies was appropriate.

Blair do a google maps look up of those other two places on the Gwabegar line, & then have a peak at the photo's around the place, there are some lovely homes & other structurs so typical of the area & other small bush towns in NSW.

Good to see you back

You're gunna have to change your blog title
How does "South - West of Narrabri" or "North of Binnaway" sound?

How did I miss this blog before? Excellent stuff!

Same period I'm planning on doing, but my conceit is that the dual-guage out on the Cleveland line in Brisbane was put through in the 50s, giving me QR/NSW opportunities.